What is The Class? The name itself is mysterious in its straightforwardness.

The Class by Taryn Toomey.

What is it? Virgin Hotels sat down with creator Taryn Toomey to learn more about her cathartic movement class that’s taken the wellness world by storm.

If you were to ask Taryn Toomey, herself—a sinewy blonde with a penchant for balletic activewear who could just as easily be the face of a high fashion beauty campaign—she’s whittled the definition down to a concise answer: “It’s a mat-based, music-driven practice of self-study through physical conditioning.”

During the course of the 65-minute workout that she created in New York, you’ll probably notice connections to yoga, Pilates and bootcamp-style group fitness. At other times, you might feel like you’re in an improvised modern dance class, at a rave or in a Jane Fonda workout video from the ‘80s, complete with motivational mantras and musical interludes. But none of that quite captures the experience. And then there’s the yelling, the growling, the moaning—the vocalized release. What exactly is going on here and why does it feel so good?

With its flagship studio in New York’s TriBeCa and classes taught at studios in L.A. and Vancouver and a new monthly residency in Miami, Toomey is currently working on opening new brick and mortar studios in existing locations, as well as bringing The Class into your home digitally. In the meantime, following along on Instagram @theclass and @taryntoomey is a good place to turn for inspiration.

We sat down with Toomey to learn more about the origins of The Class and what’s made it a cult sensation with a celebrity following that includes Jennifer Aniston and Christy Turlington. 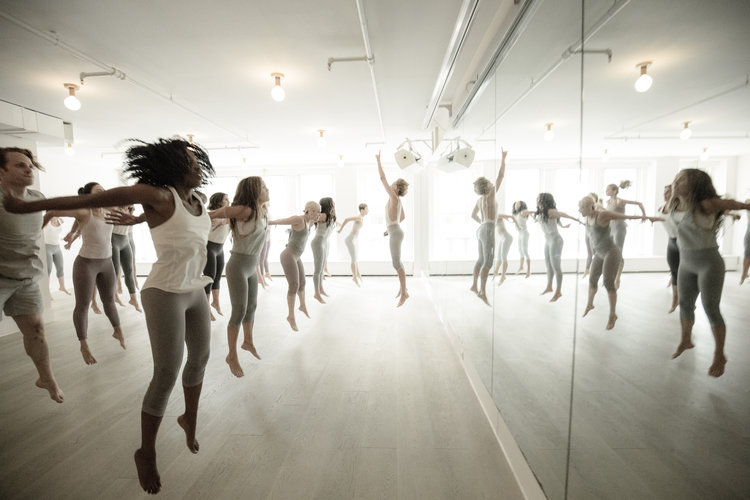 What disciplines did you draw from in creating The Class?

I pull from so many different things. I’ve always been the hunter and gatherer of my own life. It’s a combination of plyometrics, calisthenics, toning and then there’s a spirituality aspect from a lot of different things that I’ve studied in my own life and there’s some therapeutic mindfulness work that I bring in through all the different types of therapy that I’ve done. There’s a lot of different lanes we’re running in there: physical, emotional, mental and spiritual.

I’ve read that you created The Class as an answer to feeling constrained in your yoga practice. Talk to me about that.

It wasn’t an answer to what I needed from yoga, but I found that when I was teaching yoga there were parts of my yoga practice, or my asana practice, that I felt I wanted to get some more release in, so that’s when I brought fire and sound. When I was feeling tension in the body, I would add the extra exhale or the loud release to allow myself to stay in the intensity longer, essentially creating space and flow in my physical body through sound.

I’ve heard The Class described as cathartic movement. Tell me how that works in relation to repetitive movements. You’re often doing the same move throughout an entire song.

There’s an emphasis on heart openers, as well as hands on the body. Talk to me about the mind body connection there.

One of the main takeaways of The Class is that we start by explaining that the brain is an organ. It has a function. It creates thought. Then we put the hands on the body. And we tell the students to feel their own touch—your own body with your touch. From that space, you understand the difference between mind and body in the most practical reality sense. And then after we’ve taken awhile to really engage and turn the fire in the body on, then we start to understand that spirit is actually the part of us that chose the physical body to reside in and that we’re actually a soul and a spirit floating in this physical form with a brain that’s just doing its job.

How does the music play into it?

It’s such a huge part. I always say music is our co-teacher. The way that we organize music, when I train teachers, is that we view the playlist to be a whole tapestry of The Class. It’s how one song links into another, how one song opens up to be big and expansive and the next song is introspective and quiet and the way that you open and close the body and the mind through the lyrics, as well as the rhythm and beat of the music is one of the most important, nuanced parts of The Class.

What is it about The Class that you think women are connecting to today?

We’re giving people the space to feel free of judgment. What we’re talking about in The Class is that you can’t do it wrong. It’s not about right or wrong. If it doesn’t feel right don’t do it. If we hold space for people for that, they usually come back.

What are some of your favorite mantras?

If it doesn’t feel right don’t do it, I say that one a lot.

Feel it until you don’t feel it anymore.

Notice how strong you are, that’s a good one.

Talk to me about The Class by Taryn Toomey’s aesthetic. You are very intentional in your creation of a lifestyle brand.

The color palette that we use came very naturally to me. I always love things that feel soft and kind on the eyes. It’s a good balance for what we do in The Class, which is very powerful and strong, but it’s also balanced with a lot of stillness and softness.  There’s a lot of duality that goes on. I like the way that colors make you feel, so for me it’s really about the soothing element because there’s so much fire in the work that we do.

What is your wellness routine when you travel?

A lot tequila, a lot of prescription medication—no, I’m totally joking. I try to stay in the same routine that I’m on in New York City, which is morning meditation, glass of water, sweat once a day is mandatory, especially when I land. If there’s anytime I can get in the ocean or any sort of ground, then immediately I do. That’s one of the most balancing acts you can do when you travel. I can’t stress that enough to people. Get in the ocean or any sort of grassy knoll, if possible—just get your body in it. It helps to balance the body’s biodynamic rhythms. Get right into the time zone if you’re switching time zones. Eat well. Don’t go off of the rhythms you’d be in at home.

What are your travel must-haves?

I always travel with a cape, no joke, everybody laughs, but I always have a hat and I always have a cape. I live by Dr. Barbara Sturm’s Hyaluronic Serum drops. I always have sunblock, a big bag of nuts or almonds in my purse. I love Juice Press’s Mother Earth, which is super alkalizing and just helps the body detox anything you collect from traveling. I lean towards a lot of alkalizing, diuretic-style juicing and food to get the body flushing: lemon water, celery, cucumbers, things like that.

First thing you do when you check into a hotel room:

I usually open the curtains and look out the window.

When you stop and reflect on what you’ve created, how do you feel?

I don’t even really have words for it, honestly. I just hope it never goes away. The community, I just love this community so much. I don’t have words for it. I have a lot of orifice feelings in my belly. I’m incredibly grateful. 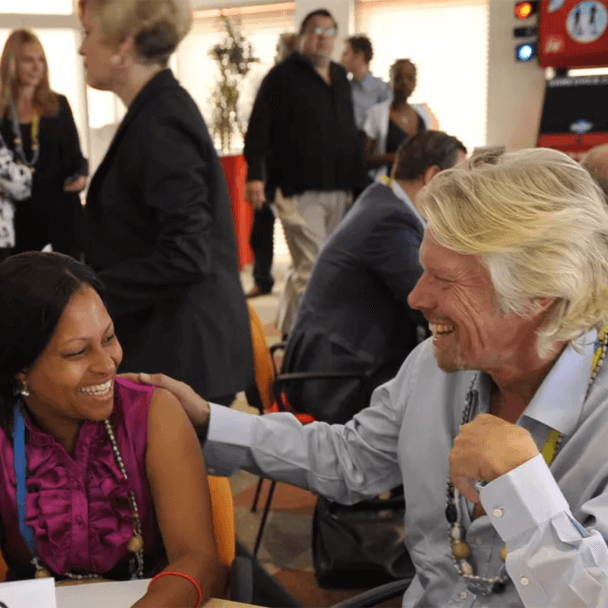 How to Turn Your Passion For an Issue into Advocacy and Action  In 2004, Richard Branson and Virgin… 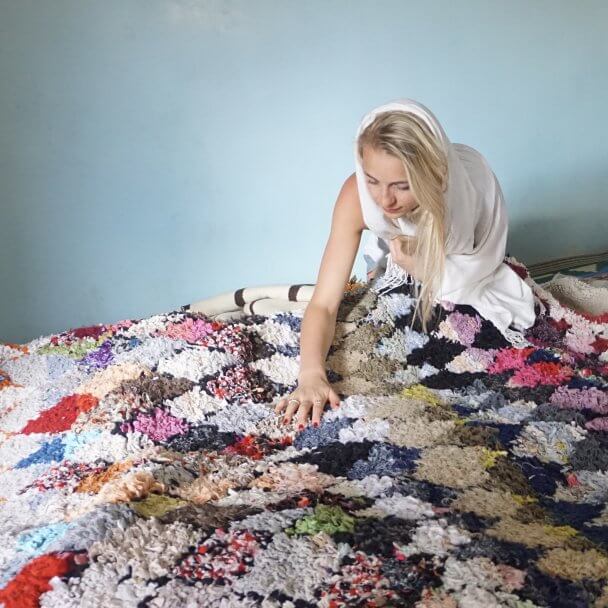 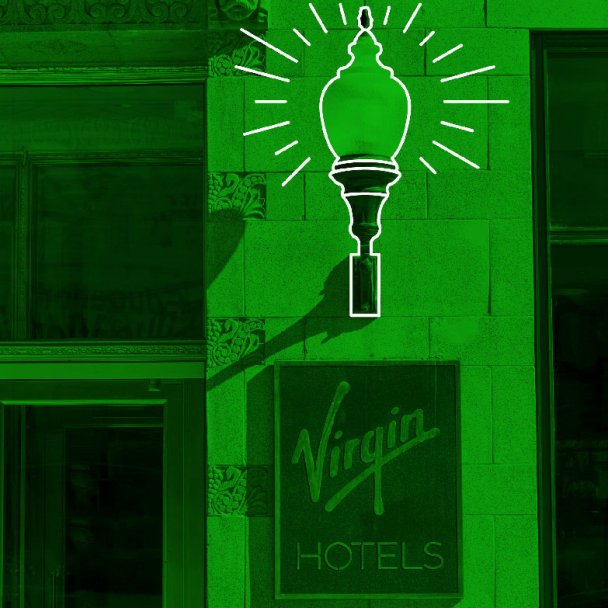