In a world overrun by technology, sometimes it pays to go a little old school. For music lovers, that’s where records come in. A symbol of music’s past, when sifting through boxes of physical records for hours on end formed a stark contrast to the live-streaming apps, digital downloads and midnight album releases of 2019, records are nostalgic. And today, their rarity, and their gradual comeback, has made them a veritable tourist attraction. Next time you travel, look up the nearest record shop and see what you find. We’ve listed five of our favorite U.S. shops below.

Since 1989, Chicago’s indie music lovers have flocked to Reckless Records for a treasure trove of new and gently-used vinyl records, games, CDs and DVDs. The O.G. location is in London, but it now has three stores in the Windy City: one in Wicker Park, Lakeview and The Loop. The setting takes you back to the simpler days of music, when going to your local record shop was the only way to find an album or discover your new favorite group. Here, bins filled with indie records and dated title cards sit next to racks of modern-day CDs—Cardi B., anyone?—and cassette tapes (yes, we said tapes) of local Chicago bands. Head to the Wicker Park location and you might get High Fidelity vibes; it was the inspiration for the look and feel of the actual movie. All stores are open daily and promise impressive collections of limited-edition vinyl pressings, imports, records and more. 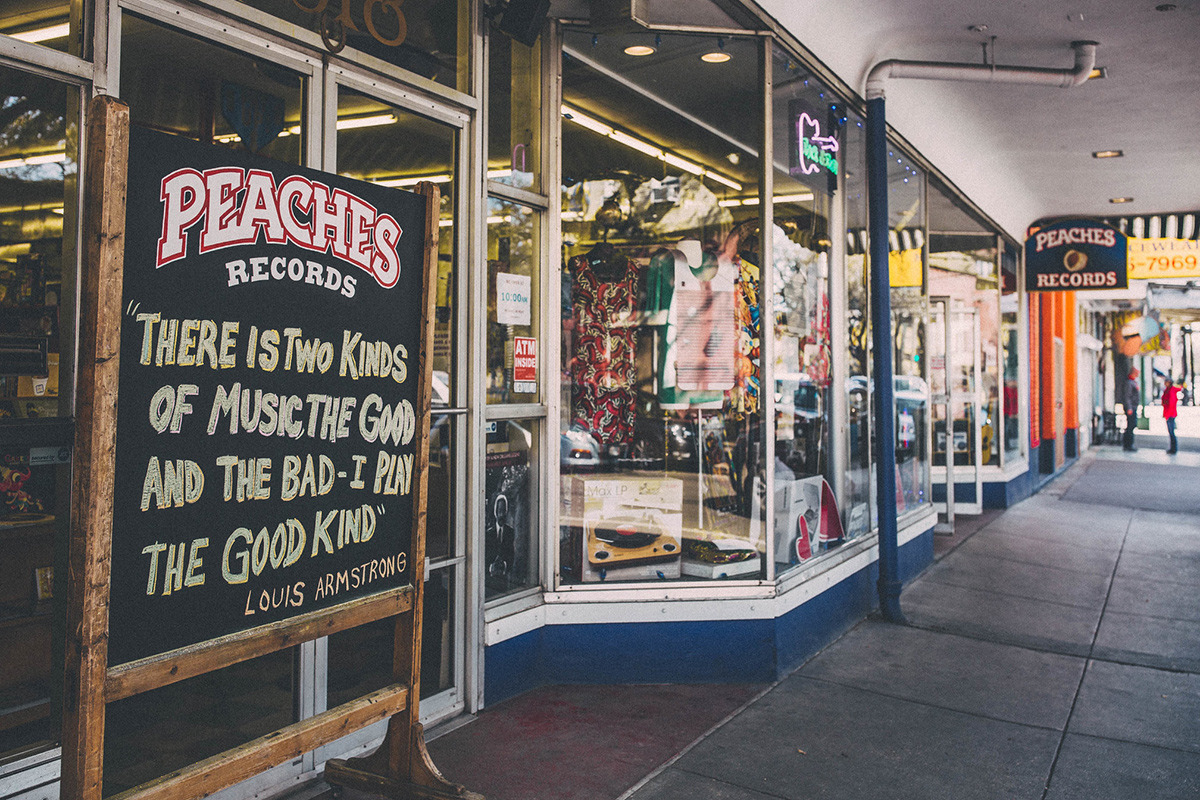 Shirani Rea is a quiet, indestructible force in the NOLA music scene, and her store, Peaches Records & Tapes, has had many lives during its 40+-year run. Opened in 1975 from Shirani’s love of New Orleans talent, Peaches (named for the classic Allman Brothers Band album, Eat a Peach), once had eight, smaller locations. The Gentilly store put NOLA’s budding hip-hop scene on the map, making Shirani “Mama Peaches” to then-rising stars like Masta P, Lil’ Wayne, Juvenile, Birdman, Cash Money and Mystikal. That location was destroyed in Hurricane Katrina, and while many business struggled to come back, Peaches returned stronger than ever. It took over the whole Tower Records building space in the French Quarter.

Today, just one, much larger Peaches sits in a 15,000-square-foot palace on Magazine Street, where it sells unrivaled collections of classic Cajun and zydeco, R&B, jazz and rock and roll. Spend an afternoon here and you’ll see everything from rare and popular vinyl, CDs, books and out-of-print collectibles, to clothes, cassettes, video shoots, record release parties, book signings, music-themed pop-up dinners and more. Pumping through the heart of it all is, of course, family. Peaches Records is run by Shirani and her son and daughter, Lee and Lillie, all of whom are self-proclaimed “music freaks.”

You better believe Music City has a solid record store. Originally opened by club owner Mike Grimes in a small home in 1999, today, the store has a hot East Nashville location and a new co-owner: vinyl expert and radio DJ Doyle “D-Funk” Davis. As its name implies, Grimey’s is a haven of new and used vinyl. But it’s also where you’ll find coveted Grimey’s t-shirts, friendly “can-do” attitudes, free in-store concerts, album release parties and locals just hanging out. Now in its 20th year, Grimey’s New & Preloved Music is as much a Nashville institution as it is a record shop. It boasts rare colored-vinyl pressings and indie albums, no stuffy or hipster vibes and employees who will help you track down your favorite record, whether they have it or not… just because they want to.

Head to San Francisco’s Lower Haight neighborhood, and you’ll stumble on a music-lover’s dream: Rooky Ricardo’s Records. The store was opened in 1987 by owner Dick Vivian, who bought 35,000 45 RPM records on a whim from an out-of-business music distributor. That collection has since grown to 100,000+ LPs and 45s, with new hits and rare collectibles coming in weekly. Vinyl collectors can go here for soul, classic rock, girl group, R&B and oldies records from the 50s, 60s and 70s, ranging from $2 for a standard 45 to $20 for a rare LP. Fun fact: Dick originally opened his store as a way to get those 35,000 records out of his garage. Fast forward 30+ years, and it’s a San Francisco landmark with four listening stations, encouraging visitors to test their favorite finds.

Known for its “Live From the Astroturf” concert series, trippy colors and critical collections of alternative and indie vinyl, Good Records is the heart and soul of the Dallas music scene. Tucked in a shopping small, this spot is more than just a good record shop. It’s a place to come hear great music (either on the for-sale 45s and LPs, or from whatever live band is playing), discover groups you love and stay awhile. Clinching its popularity, big names know how important Good Records is, too. Local and national artists with sold-out shows will make time to play a free concert on its carpeted stage, and Beto O’Rourke even stopped there on his Senate campaign trail. Head there on Record Store Day each April, which doubles as the store’s self-proclaimed birthday, and join the party with cheap drinks, food trucks and live music. At Good Records, it’s always a good time.