The midwestern United States might not strike you as a haven for house music, but in fact, it was actually born there! In 1977, the Chicago club scene was graced with a new addition called The Warehouse, where then-musical director and disco guru, DJ Frankie Knuckles, experimented with a new form of music. This one was created by fusing popular disco hits with a “Eurobeat pop” that was gaining strength in gay clubs overseas. The result? A deeper, more raw form of music designed to make club-goers dance, with dub effects, drop-outs and synthesized sounds that made much more sense for DJs to work with then, say, musicians playing real instruments.

From then on, the DJ-club-house scene in Chicago only grew, but just like it started, it has always reigned as a heavily male-dominated industry. Luckily, in 2019, Chicago’s diverse neighborhoods are forcing change and breaking down gender barriers in the music industry, with more females powering festivals and nightclubs now than ever before. (Look at Lollapalooza, for example, which featured Ariana Grande as its first female headliner just this year.) We sat down with two of Chicago’s female music powerhouses, Chess Knight and EvieTheCool—both regular DJs at Cerise at Virgin Hotel Chicago and no stranger to the Windy City club scene—to talk about the industry, the rise of female DJs and why you can expect to see even more women rocking the turntables soon. Here’s what they had to say. 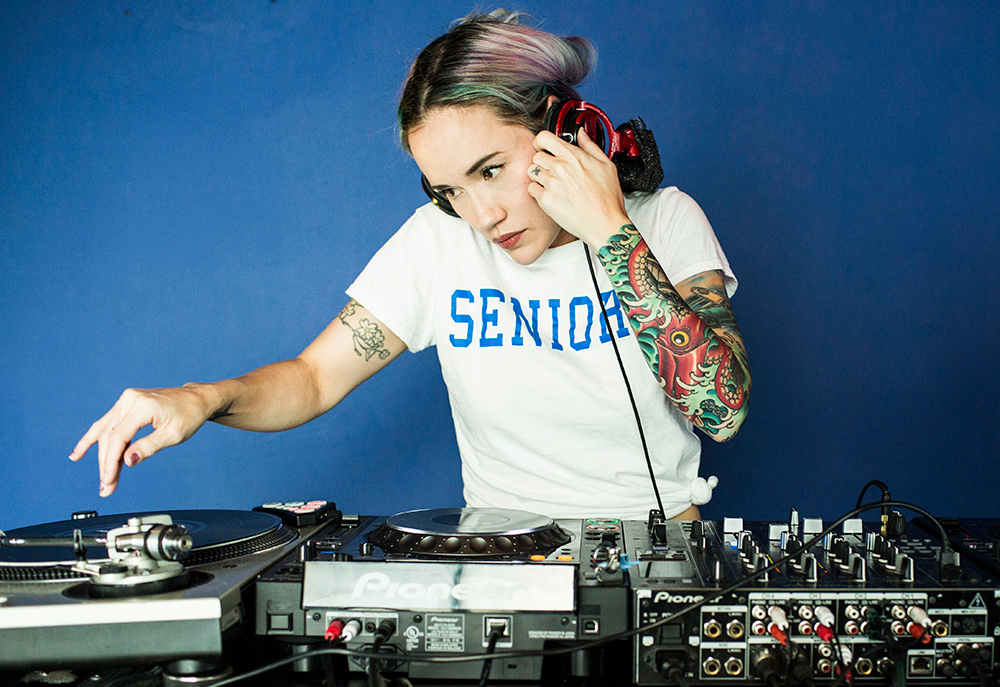 How did you get started?

“During my internship at Metro, a concert venue in Wrigleyville, Joe Shanahan (the owner) suggested I DJ a punk rock night in Smartbar. He was impressed by a couple mixes I made for the office. Shortly thereafter, I teamed up with talent buyer Chris Baronner and we started an indie dance party called ‘Life During Wartime.’

How would you describe your DJ style or influence?

“When I started DJing at Metro, I mainly played punk and indie rock, but for my ‘Life During Wartime’ dance party, I learned to DJ a little bit of everything. I can play specific genres depending on the gig, but I honestly love being open format and take pride in my versatile and eclectic style. I love many genres of music, new and old, and love mixing it up.”

What are some of the challenges you’ve faced as a woman in the industry? Is it particularly different from women in other industries?

“I think women face similar challenges in every industry. Specific to DJing? Well, showing up to a gig and having people assume you don’t know how to use or set up the equipment. Male DJs assuming you get gigs, just because you are a woman. And yes, sometimes I have gotten gigs for just being a woman, but believe me, those are the worst kind of gigs. You are basically hired to be a prop and you are also treated as one.

Then there is the expectation to put more effort into your looks. A lot of male DJs I know can show up to gigs having just rolled out of bed. As a woman, that is frowned upon. I remember showing up for a gig and I had just dyed my hair brown after being blonde and the person that booked me frowned and snapped, ‘Oh, we thought you were blonde.’ I don’t know how many men have had to deal with that.”

Chicago has seen a rise of female DJs in recent years. Why do you think that is?

“l think there has been a ripple effect. I worked at Metro and would see resident DJs Lady D and Colette play Smartbar a lot. I knew women could be successful DJs, and I wasn’t afraid to try. I know I have inspired younger women to try—they’ve told me! It’s great to see. I honestly love playing with other female DJs. I actually started a collective called ‘Club Mesh’ with my friends DJ Lani Love and Dial Jess. We formed after we did the Breast Friends series at Virgin Hotels Chicago’s rooftop, Cerise, last summer to raise money for breast cancer research and the American Cancer Society.”

If you were going to give one piece of advice to young women who want to break into the field, what would it be?

“In this day and age, with all the software and access to digital music, anyone can be a DJ. Technical skills just come with practice. What makes a DJ great is their passion and love for music, their taste and their ever-growing library of tracks. You have to be doing it for the love of music, first and foremost. If you are doing it for other reasons, well, you might have some initial success, but you won’t last that long.”

What’s your favorite thing about being a DJ?

“Exposing people to new music is a wonderful feeling. Reading a crowd of complete strangers and getting them to dance is also a huge rush, especially very diverse crowds where you have to mix it up a lot. Finding that sweet spot where you are blending two or more songs at once and creating a remix or mash-up on the fly? Well, that’s the best high.”

How did you get started?

“I was going through a lot at the time, and I felt very depressed. My good friend, Peezy, owned a studio and gave me an open invitation to visit any day that I could, just so I would be around inspiration. That’s where I met Vic Mensa’s producer, Smoko Ono. He taught me the basics of DJing.”

How would you describe your DJ style or influence?

“I am an open format DJ, which means I play a bunch of different genres. Most of my influence comes from underground music—I barely play any top 40s hits.”

What are some of the challenges you’ve faced as a woman in the industry? Is it particularly different from women in other industries?

“Early in my career, I had some men blatantly treat me as though I wasn’t a qualified DJ. As time progressed, I’m happy to say I stopped experiencing that! I feel like women in all creative fields go through the same thing at some point; the key is to stick together.”

If you were going to give one piece of advice to young women who want to break into the field, what would it be?

“My advice would simply be to go for it. Download Serato; it’s free. Upload your music and start playing around with the DJ program. If it feels good, find a studio where you can practice. (Scratch Studios is a good place.) If you love it, invest in equipment and start working towards a DJ career.”

If you have one, tell us the mantra or belief that you live by.

“‘Be useful, not useless.’ I invented this quote to push me to keep going, even when I wanted to stop.”

What’s one thing about being a DJ that no one knows?