It was noon on a Friday and Kip Moore was surrounded by his fans, sipping bourbon. A true rare talent in the modern country music world, Kip sat down with A Drink With in the oh-so-fitting Upstairs to chat about his new album, Vegas and kissing on the first date. Read the full interview.

ADW: WHAT’S YOUR FAVORITE MEMORY THAT HAPPENED OVER BOURBON?
KM: Oh gosh. It was an old camping trip with some buddies. When you do what I do now and you’re gone so much, you really cherish when you get to have moments with people you know really care about you and it’s not about any of the stuff that I do. It was one of those things where we were all hangin’ out. We were all camping on a beach, actually, and playing music. It was in Maui. We started pouring whiskey and it was just that thing: the smell of the air, the smell of the fire, the stories that [were being told]. It was a recent memory, but it was one of the better ones that I’ve had. It was just five or six of my best buddies. It was good times. 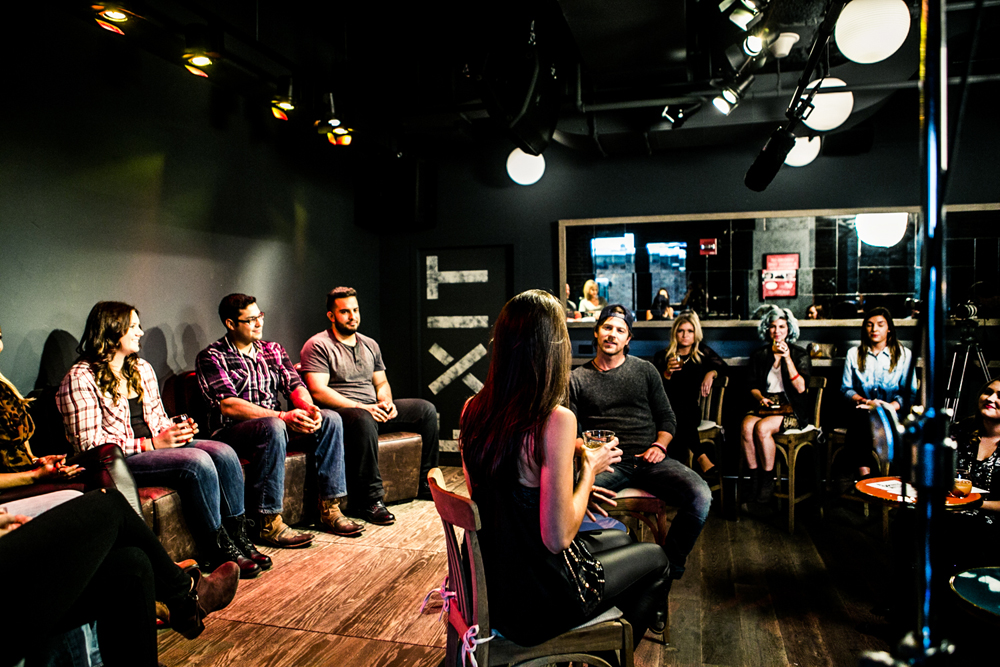 ADW: DO YOU PREFER SMALL INTIMATE GROUPS LIKE THAT OR DO YOU LIKE BIG PARTIES AS WELL?
KM: I’m the type… When I go to Vegas…

ADW: I WANT TO GO TO VEGAS WITH YOU!
KM: No you don’t. I’m an interesting bird. I’ve been to Vegas probably 25 times and I’ve gone out one time. One time ever. I go in my room [after I play]. I’m a recluse. I mean, I’m playing on stage every night [so I’m fine in a crowd], but if we set up a small little thing in front of my bus with 10 people and you give me some bourbon or wine I’ll cut lose. I’ll break out and dance. I will get down. I think it’s more of a comfort level thing for me. The one time we did go out [in Vegas] I ended up being in a booth. I guess that’s a big deal at a nightclub. They were doing bottle service—which is another thing I didn’t know was a big deal— and we were right beside Lil Jon. I noticed everybody waiting around our booth to try and come in. I thought it was the strangest thing. I was thinking, “What is going on right now? Get me out of here.” But anyway, that ain’t my scene. 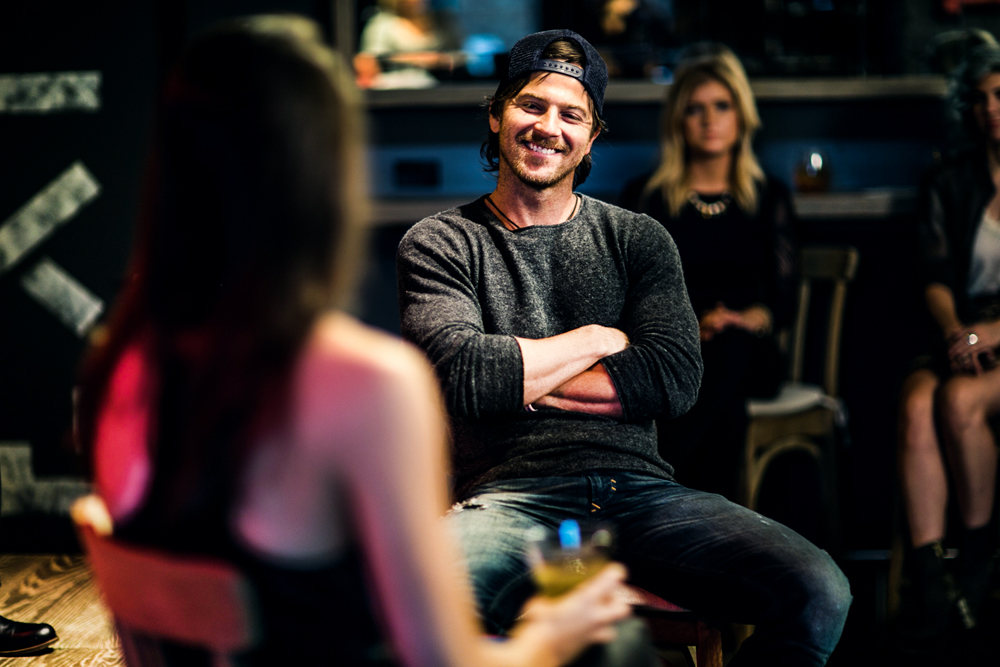 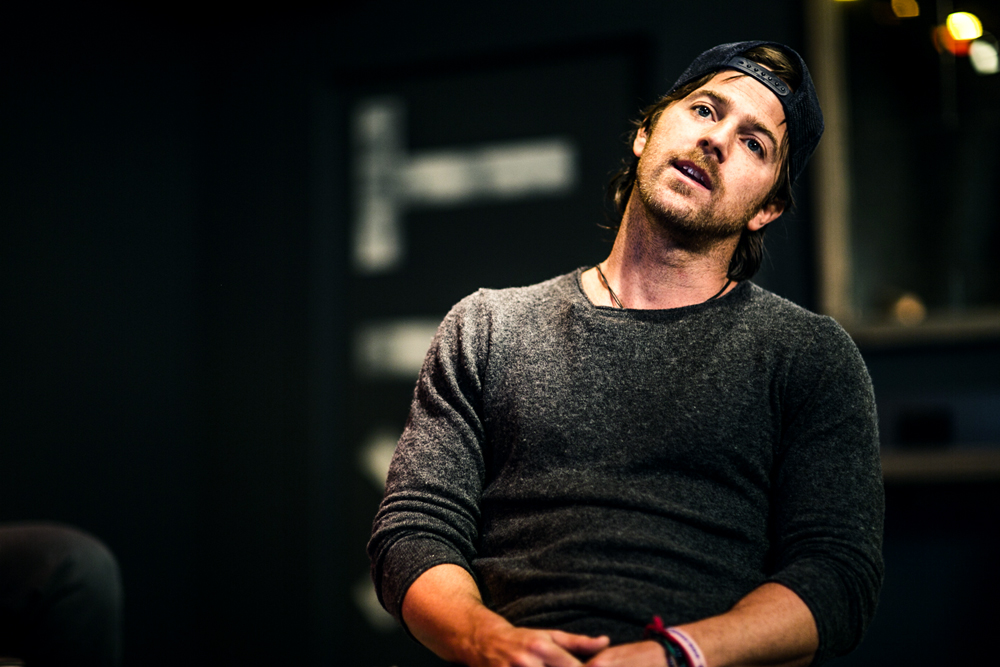 ADW: WHAT’S A DAY IN THE LIFE OF A COUNTRY STAR? WHAT TIME DID YOU WAKE UP TODAY?
KM: Five minutes ago. [Laughs] It all varies. We are constantly traveling and sleeping on a [bus]. I had a fan tell me something that kind of crossed me. He said, “I work a real job. All you do is sit on stage and play music every night.” My fist almost went into him, but I calmed down. I’ve done every job there is to do and this is definitely the most taxing thing. I love what I do, but this summer I didn’t go home for 41 days. Most of the time when I’m on that bus I don’t get more than four hours of sleep in the night. You’re not winding down. A lot of the times I’m signing [and meeting fans] after the shows, so I’m not getting back on my bus until 1 a.m. I’m not lying down until 2 or 3 a.m. and then I have to wake up at 7 or 8 a.m. to do phone interviews. I go to radio stations and play a lunchtime thing, do a VIP thing for a show and then I do a meet and greet. You’re constantly putting yourself out there and not really getting time for yourself.

ADW: IS THERE A SONG ON “WILD ONES” THAT YOU WOULD HAVE NEVER PREDICTED YOU’D WRITE ABOUT 10 YEARS AGO?
KM: Oh, man. I feel like there are a few of them on that record. I would say “Heart’s Desire.” I’ve been really good at not really letting people in. I’m kind and I’ll have relationships with people but not really let them in. I think that song was a very, very vulnerable song for me about some things that took place years ago and it was a tough song to write. It took me months to write that song and that was the most exposed I could possibly lay myself on the table. 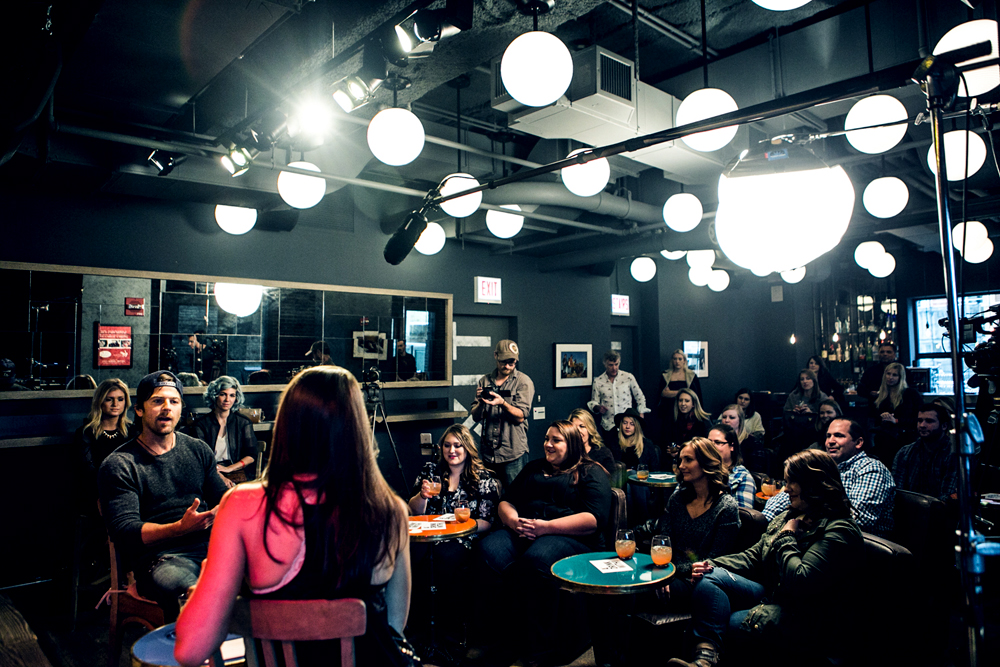 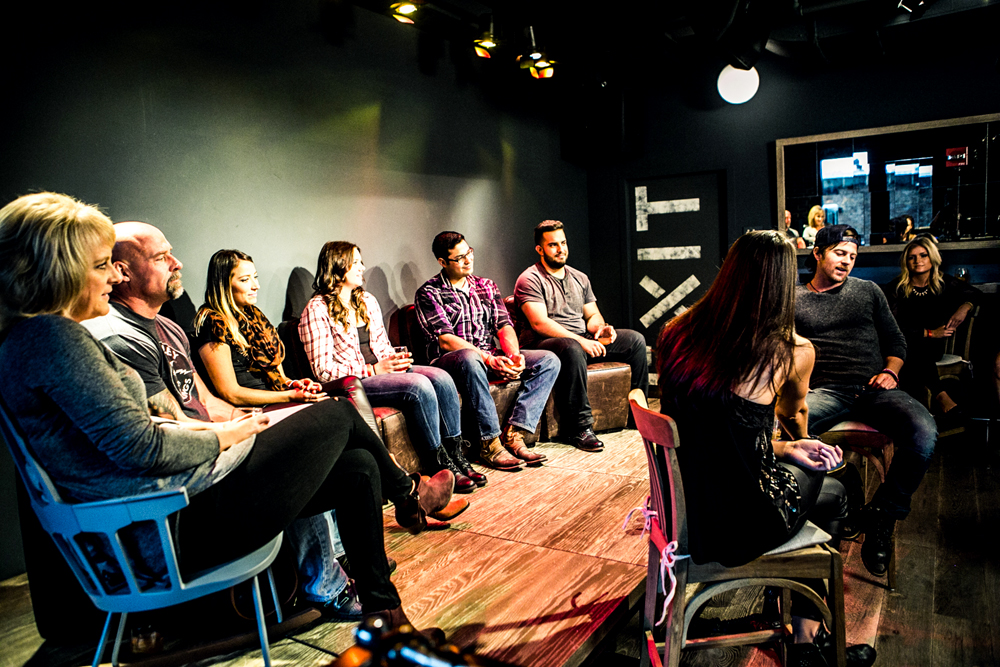 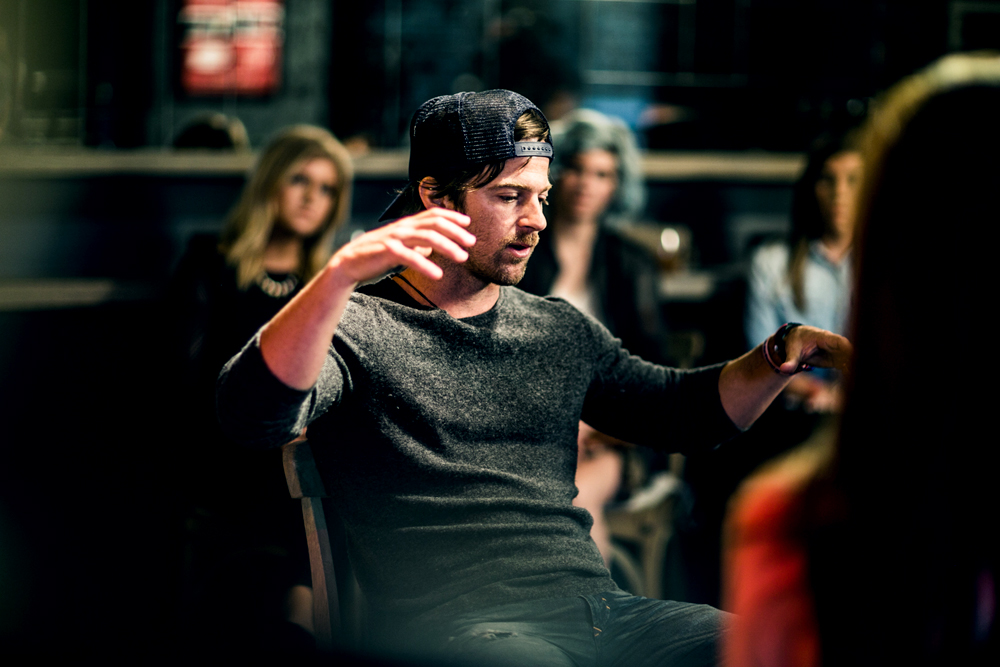 ADW: IF YOU COULD HAVE A DRINK WITH ANYONE, WHO WOULD IT BE?
KM: [Sings] “If I could have a beer with Jesus…” I know I just made a little thing with the Thomas Rhett song, but honestly my first thought— and then I’ll have the Bible Belt really slamming me when I say this but— I would want to sip on a drink with Jesus. If we are going with somebody that everybody believes in I would say Michael Jordan. I’ve never been such a fan of somebody so much. I get fighting mad when anybody tries to compare anybody [to him]. I would just want to hear stories from him. I’d want to have a cigar, a drink and I’d want to hear about everything that happened in the league. And I’d say, “Man, don’t let anybody compare Lebron to you!” 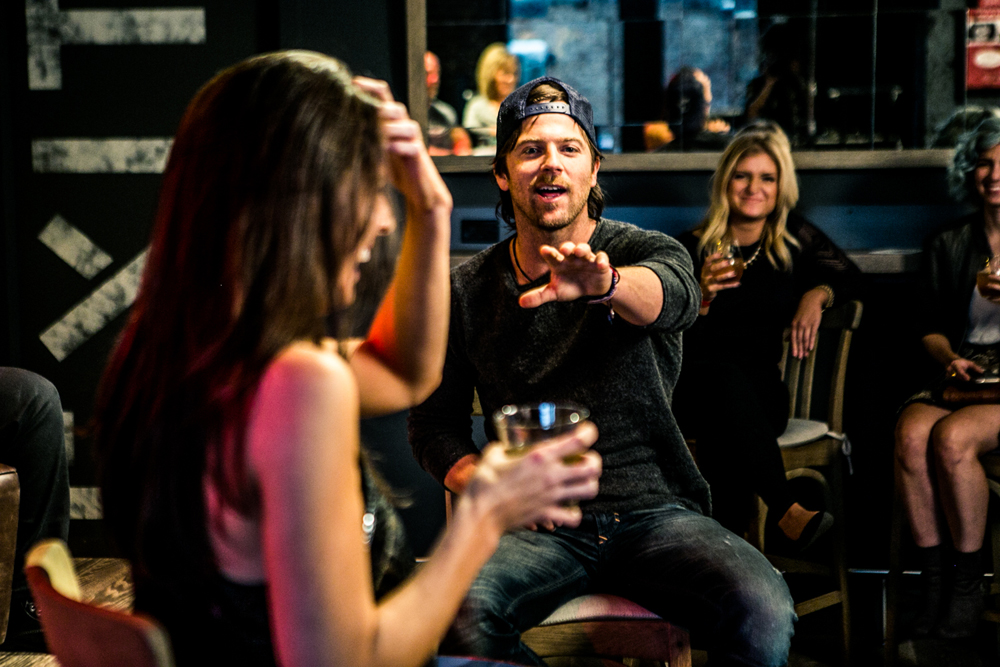 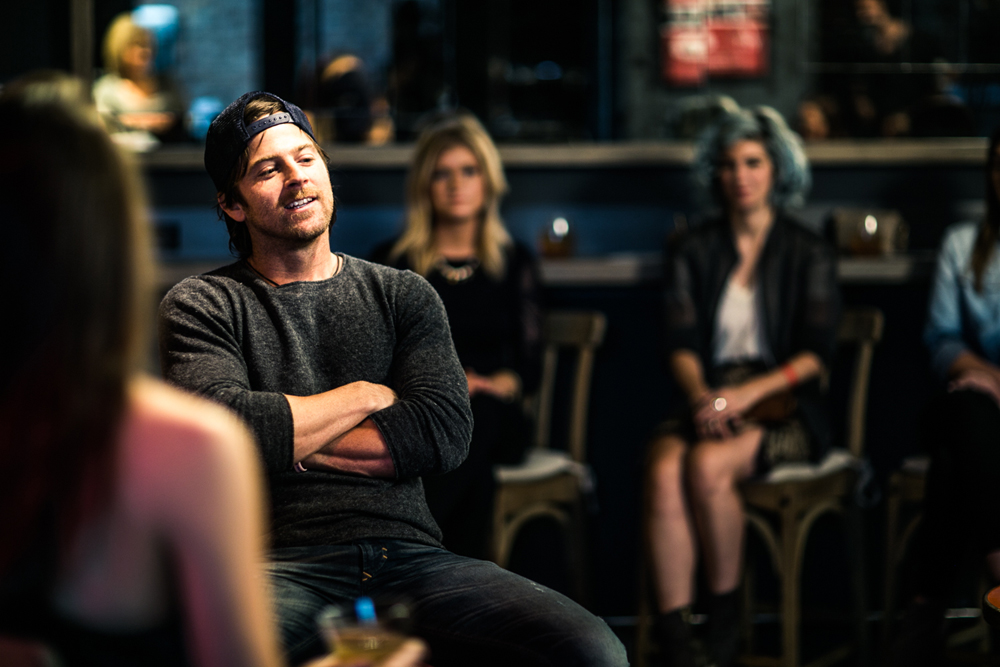