A Drink With sat down with The Fat Jewish to talk Instagram, Richard Branson, and what he makes his poor interns do – all over a bottle of White Girl Rose in Richard’s Flat. Really, what more can you ask for than money, pizza, respect and naturally, The Fat Jewish. Visit ADW.com for more.

ADW: YOU HAVE 7.5 MILLION INSTAGRAM FOLLOWERS, WHICH IS MORE THAN PRESIDENT BARACK OBAMA AND OPRAH WINFREY. WHO IS SOMEONE YOU CAN’T BELIEVE FOLLOWS YOU?
FJ: It was nice out in September and someone came up and put their hands over my eyes from behind, which is weird even if you know them. She said, “Guess who.” I really didn’t know. It was Brooke Shields, which was so weird. She was kind of day-drunk which was chill. She was rosé-drunk, which is what you should be at 3 p.m. on a Saturday. But I’m such a big fan of hers and now people ask me, “Do you ever get nervous when you post something on Instagram because there are so many people that look? Are you worried that they’re not going to think it’s funny?” I always say I used to not really give a shit. It was kind of just for me and I sort of pretended it was my friends and me. She said, “I love your Instagram. I look at it every day.” Now I’m in my head thinking, “Is Brooke gonna like this? What if Brooke doesn’t think this is funny? What if Brooke unfollows me?” That would be horrendous. Now she’s really upped the pressure of the situation. 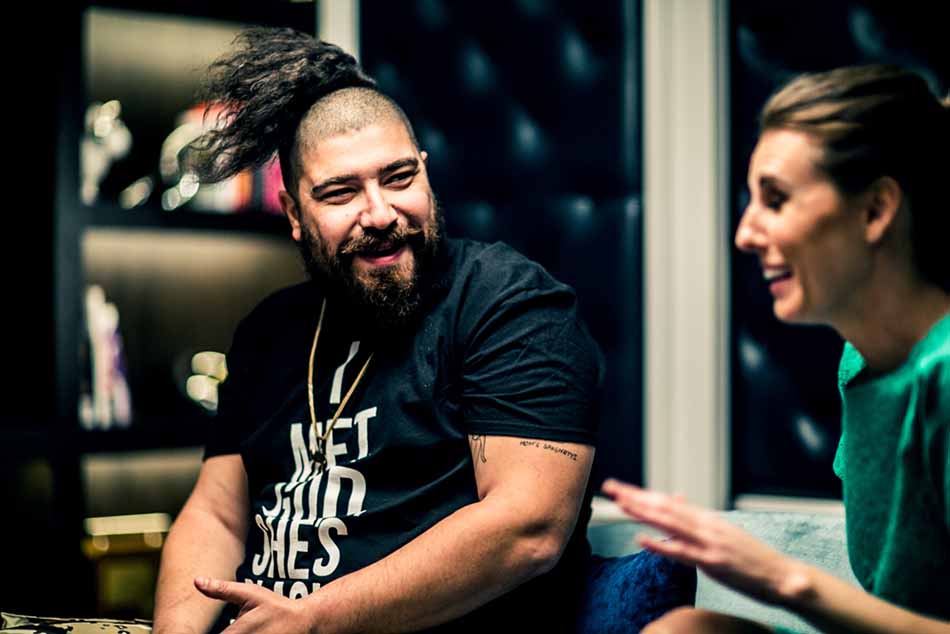 ADW: WAS WRITING YOUR BOOK, “MONEY PIZZA RESPECT,” EASIER OR HARDER THAN YOU THOUGHT IT WOULD BE?
FJ: It was a nightmare. It was a complete nightmare. I don’t even understand how people write books. I definitely don’t understand how people write fiction. These were just stories from my life that I was retelling. I found out that my mom had sex with Shel Silverstein and stuff like that. You don’t even have to make it up, but what if you’re writing a story about a family on the frontier? I don’t even know how you make this shit up! It’s insane. I can barely recount stuff that actually happened.

ADW: WHERE DID YOU SIT DOWN TO WRITE YOUR BOOK?
FJ: I had this big, grand plan. I got a whole bunch of designer drugs and rented a hotel room out by JFK [International Airport] in New York. I thought, “I’m going to stay in here for a week and a half doing coke and when I emerge it’ll be done.” Then one day in I was like, “I feel sick. This isn’t working.” So that was supposed to be the plan, but then I ended up just writing it in my house.

ADW: PLEASE TELL ME THE CHAPTER WHERE YOU THOUGHT YOU WERE THE MOST FAMOUS KID IN SCHOOL BECAUSE YOU WERE IN ONE HERSHEY’S COMMERCIAL IS TRUE.
FJ: Yes, completely true. I went from unknown to incredibly famous in my own school to a diva, fucking Mariah Carey nightmare to completely washed-up and out of the limelight— all within 45 days. It was a really quick meteoric rise to child fame and immediate downfall. It was done within about two calendar months. At the height of it, oh man, I was diva-ing out. 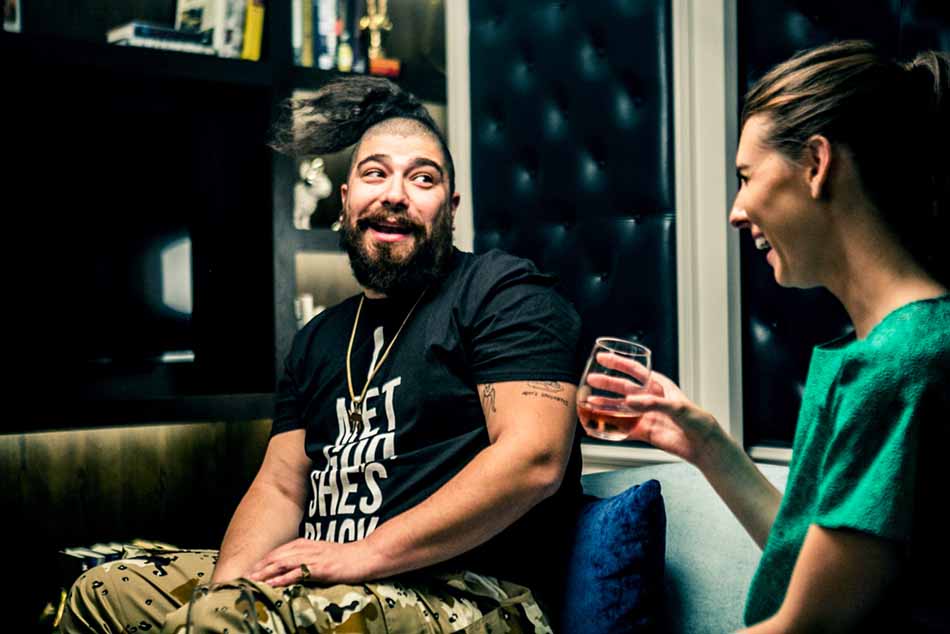 ADW: WHAT DO YOU THINK IT IS ABOUT YOU THAT MADE YOU BREAK AWAY AND GARNER SUCH A LARGE FOLLOWING?FJ: I don’t know. That’s a good question. I honestly think that people are scared to try to relate to everybody. You feel like if you go too broad or too mainstream that it’ll dilute what you’re trying to do and that it’s impossible to connect with everyone. My feeling is, “This is a big orgy party. Why don’t we have everybody?” I can have 8-year-olds and 80-year-olds. I feel like I can connect with a Puerto Rican child or an old woman. I can do both of those things. People are scared to do that because it might get watered down if you try to go too broad, but that’s why people gravitated towards my stuff because it was for everybody. I wasn’t scared to try to do that. Get everyone to the party.

ADW: WHAT HAPPENS BEFORE YOU POST AN INSTAGRAM? IS THERE A PROCESS?
FJ: I kind of just let it rip. I think sometimes people think I say, “We need a photo, we need a caption.” A lot of times it’s just me driving a car, smoking a cigarette, blasting Miley’s last album— which is really underrated by the way, her last album’s really good— and I’m just kind of like, “Oh shit, I should post this up.” I’m writing a caption trying to drive with my legs. I never wanted it to become more than it was when I had 100 followers. I just want to put out funny stuff. I like to say I can take you out of the day for a minute. If you’re at the DMV in a long line and it’s 10:30 in the morning and some guy’s eating chili and you’re thinking, “It’s way too early for chili. Where did you even get chili at this time? Is that from last night?” Maybe he’s a construction worker – they eat lunch really early – and you’re like, “There’s a baby crying, this is a fucking nightmare.” I’d like to think you look at my Instagram and forget about the chili smell for 10 seconds. So I like to get stuff out there all day and I definitely don’t sit and say, “It’s Instagram business time.” 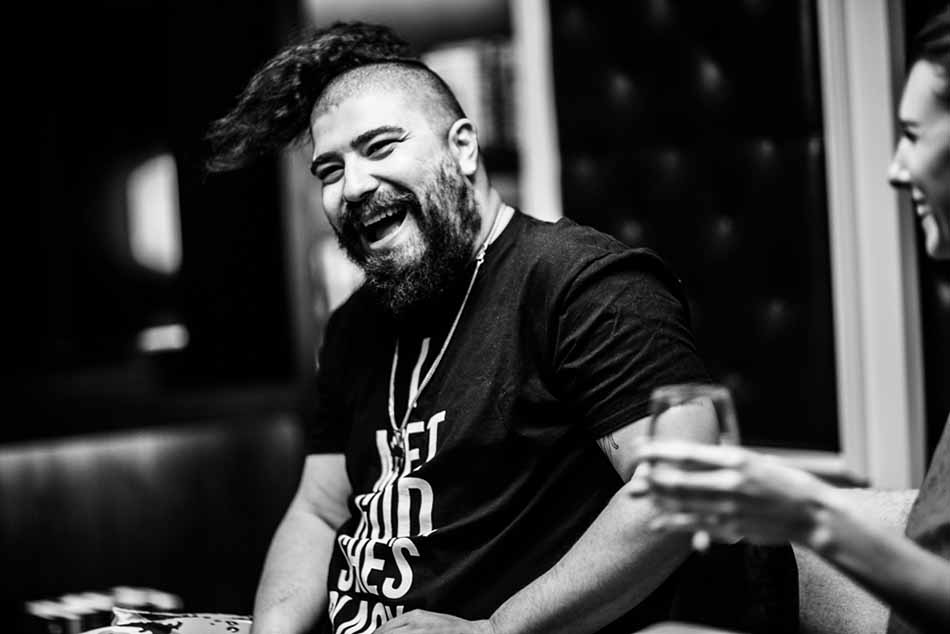 ADW: IF YOU’RE TRYING TO BUILD A SOCIAL MEDIA FOLLOWING, AT WHAT POINT SHOULD YOU CONSIDER IT A HOBBY VERSUS A BRAND?
FJ: I think people focus too much on the numbers and not enough on who’s looking. If you have 37 followers and you’re getting 14 likes, you’re killing it. You’re nailing it, because you should have four likes. You should have so few likes that you can still see the names— it’s a weird place to be. If I see that, I take them out of that. Side note: a lot of people that I actually know in real life have asked me to stop liking their Instagram photos. I forget I have so many followers. I’ll comment on something my friend puts up and then 400 Ukrainian teens show up on his page. I have a friend who’s a nice looking girl who posted a picture of herself in a bikini and then 400 Eastern European teenagers showed up posting, “I want to be in you.” She goes, “I don’t want this, please stop liking my photos. Text me and tell me you like it, don’t actually like it.”

ADW: SINCE WE’RE IN RICHARD BRANSON’S FLAT, IF YOU WERE TO HAVE ROSÉ WITH HIM WHAT WOULD YOU TALK ABOUT?
FJ: Richard Branson is straight up from the future. I’m not serious about anything, but I am serious about Richard Branson. He’s straight up on a whole other level. I met this girl and I was trying to be with her and I asked her what she does. She told me she sold tickets to space. I was like, “Whaaat? You sell tickets to space?” She basically sold tickets to space for Richard Branson. Richard Branson has people in the world whose job it is to sell tickets to space. That is so killer. No one is doing that. Obviously I knew that he could do anything. I feel like Richard is cliff-diving naked with the ghost of Steve Jobs. That’s what I imagine he’s doing right now at this exact moment in a country where it’s two days from now at 10 in the morning.

ADW: WOULD YOU GO TO SPACE?
FJ: Definitely. So down for space. A lot of people are not down for space. But this girl sold tickets to space. That is the most future job. Imagine you had told that to my grandfather.

ADW: IF YOU COULD HAVE A DRINK WITH ANYONE, WHO WOULD IT BE?
FJ:I would be in a bathing suit with my legs wrapped around Richard Branson while we’re parasailing through an ocean we’ve never heard of two days from now. I’d have the rosé bottle around his shoulder and he’d be drinking out of it with a straw. And I’d be kissing his back. I’m trying to sleep with Richard Branson, that’s kind of what I’m getting at. Has that not been made clear? That’s what I’ve been intimating. You said, “Have a drink with?” or “Have sex with?” They’re both Richard Branson. 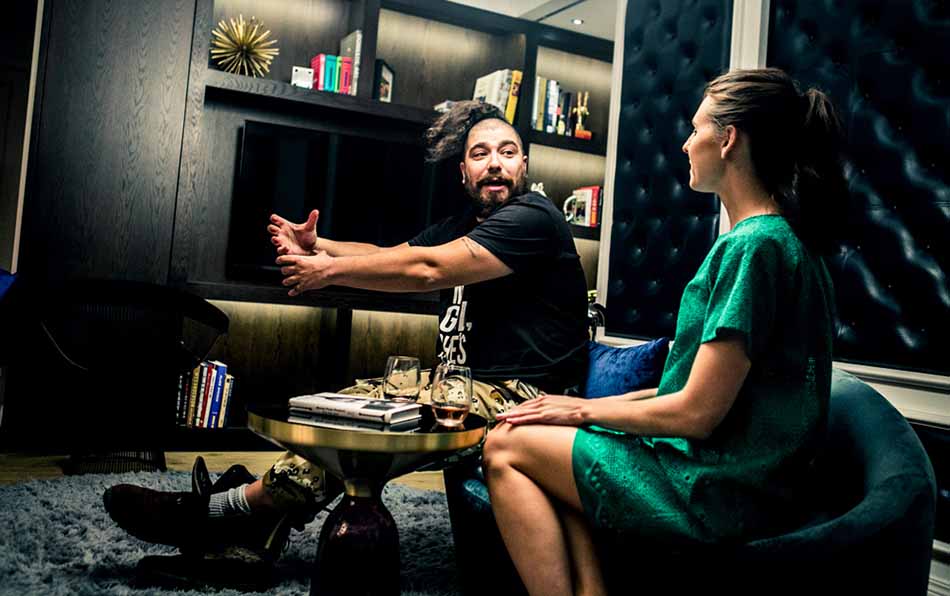 ADW: I COULD START ASKING THAT IN MY INTERVIEWS, TOO.
FJ: Yeah, not a bad question. So, Richard Branson. And not even because we’re in his flat. We could be anywhere right now and I would’ve said the same. You gotta have a drink with a guy like that. He’s like, “I’ll make your airline and your cell phone and your hotel.” Totally. And his hair? What does that guy use for conditioner? How do you get that kind of volume and body? So voluminous… it’s probably something so crazy. It’s probably falcon saliva. 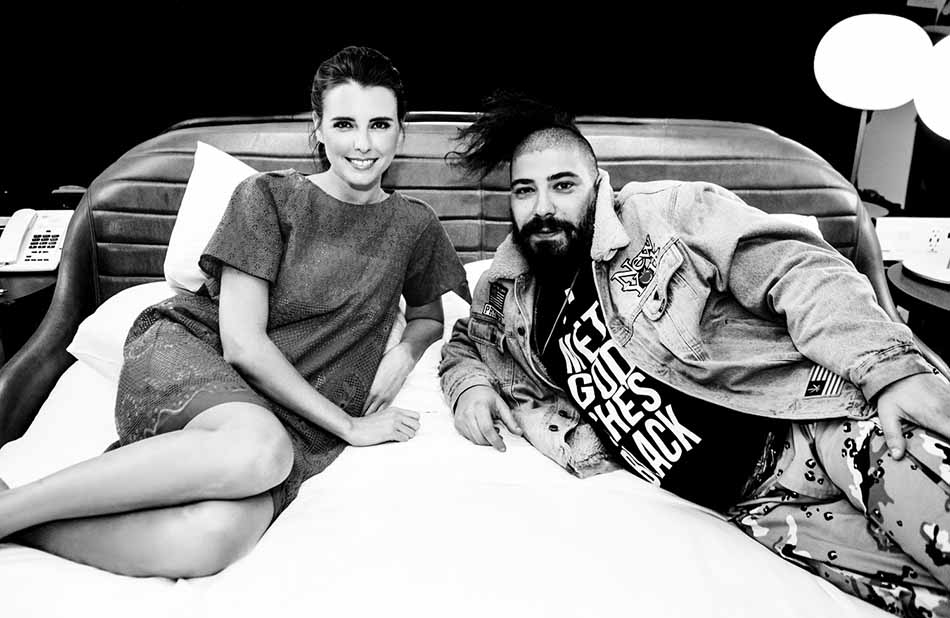