When we heard the glamorous Dita Von Teese was coming to town, we knew we had to sit down with the burlesque queen and get all the infamous details, naturally in The Shag Room in The Commons Club. We grabbed a glass of champagne and talked about – well, pretty much everything: growing up in the Midwest, falling in love, and becoming a Hollywood star. Read More at adrinkwith.com.

ADW: Is champagne always your go-to?
DVT: I like to drink tequila, too. I like a lot of different kinds of drinks, but champagne is what I drink before I’m about to go on stage. I’ve tried other kinds of booze and nothing gives you that lift and that joyful, special feeling. I used to experiment and think, “I should have a little vodka because it’s probably better for the stomach and the corsets,” but [champagne] really gives you a different feeling, a joyful feeling onstage. 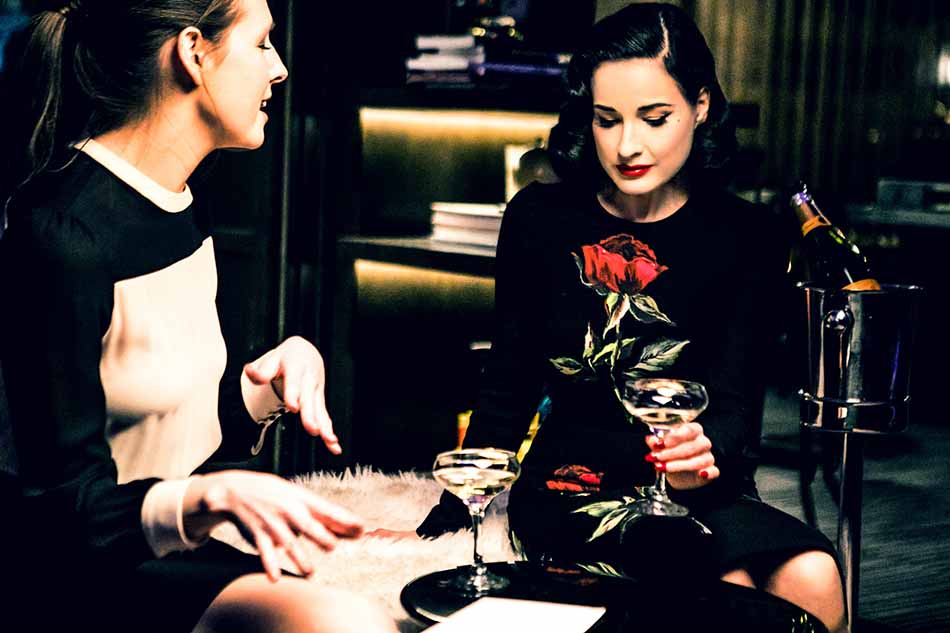 ADW: Do you still like absinthe?
DVT: Yeah I do! I like to cook with it actually. I have this dish that I love to make. It’s a vegetable saffron absinthe pot pie. I love that flavor, but I have to say it took me a long time to drink it again after getting divorced from my ex-husband [Marilyn Manson] who was a huge absinthe fan. It’s been over a decade. It’s okay now. It’s just a nice drink. It gets you drunk faster. That’s for sure.

ADW: You’re on tour for your burlesque show, “The Art of the Teese.” What is your pre-show ritual?
DTV: Champagne is one of them. The show usually starts at 8 or 8:30 [p.m.], depending on the venue and I like to get there really early. Sometimes at 3 o’clock because the time just goes by really fast. I like to be able to hang out, take my time and not have to be rushed at all so I can get ready in a leisurely way, stretch, talk to people and listen to music. I like to take forever. I don’t take that long to get ready really, but it’s just better to be calm and because you never know what’s going to happen either. 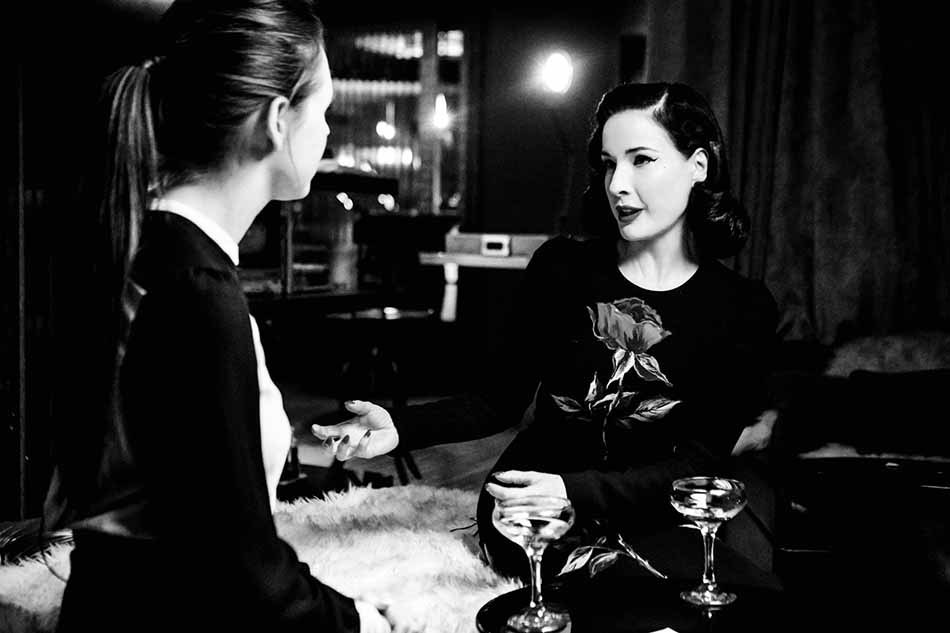 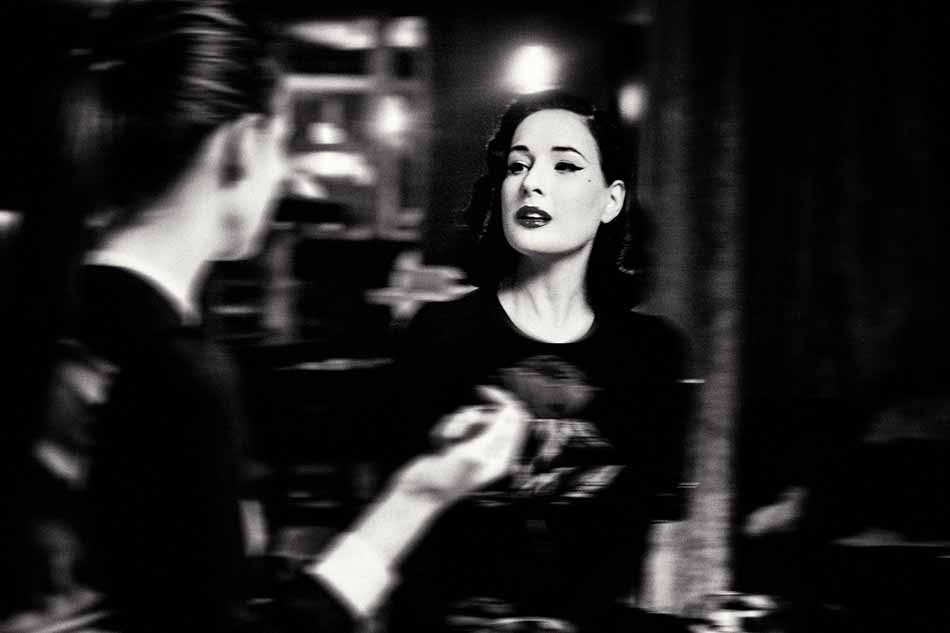 ADW: What is the craziest, most unexpected thing that has happened pre-show?
DVT: We could be missing a costume piece and it’s like, “What am I going to do without the skirt?” or, “Underwear is gone, what am I going to do now?” Things like that. You want to have all of your ducks in a row and be ready.

ADW: I love that you do your own hair and makeup and that you don’t need a glam squad.
DVT: I like working with a glam squad occasionally for certain photo shoots, but backstage I’ve tried working with people… even people who are friends that do hair and makeup and it always ends up being a rush. Also, I don’t want to hear somebody’s cellphone. It’s just me, painting. It’s a process. I like the quiet time. I just have my dresser who I’ve known for 30 years. We’ve known each other forever, since we were teenagers. It’s just perfect. When you have too many people in the mix they get really into what they are doing and they forget that there are all of these other things that have to happen. Before I’ve been like, “Hurry, you’ve got to finish this hair. I gotta go on stage.” I don’t want to feel like that. I’d rather blame myself if I’m running late, not someone else. 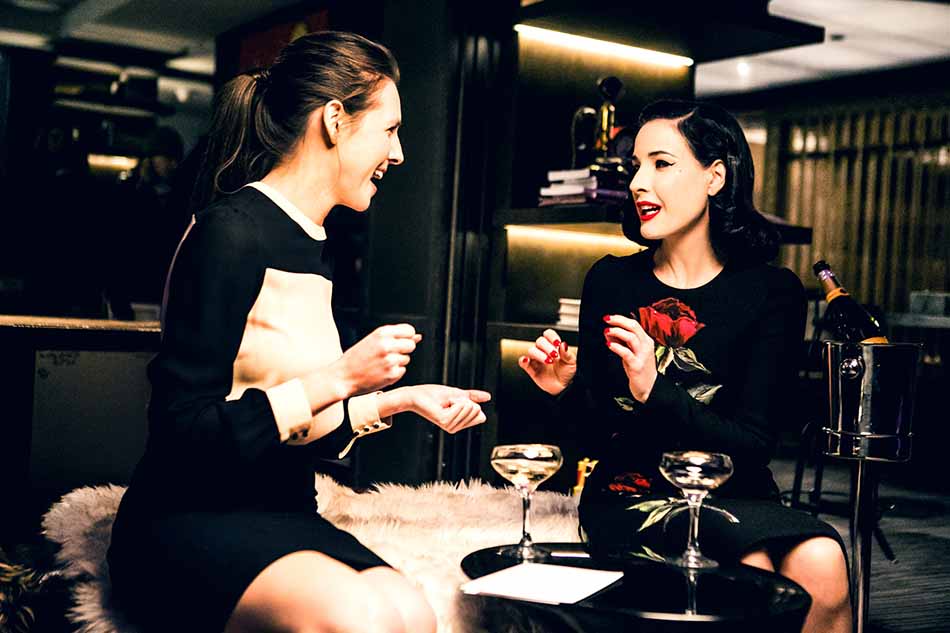 ADW: Did you ever imagine your life would be this big?
DVT: No, never, never. I was just, you know, working in a strip club. I was doing striptease – pin-up style – and taking photos and I was doing it for fun. I was 19 years old and having a good time, I felt like I was documenting the height of my beauty. [Laughs] It’s really funny, when you’re young you don’t really realize how much further you have to go and how you can evolve in your sensuality, sexuality and your wit and wisdom and how all of that goes into what makes you sexy. When you’re 20 you just think, “Oh, my butt looks good! That means I’m the sexiest girl in the world.” … Take care of yourself. I got some good advice once from someone who said, “Just don’t ever let it go. Don’t stop exercising, don’t stop eating well, don’t stop using sunscreen, just be consistent.” You can have fun, but be consistent in what you do. I like discipline. 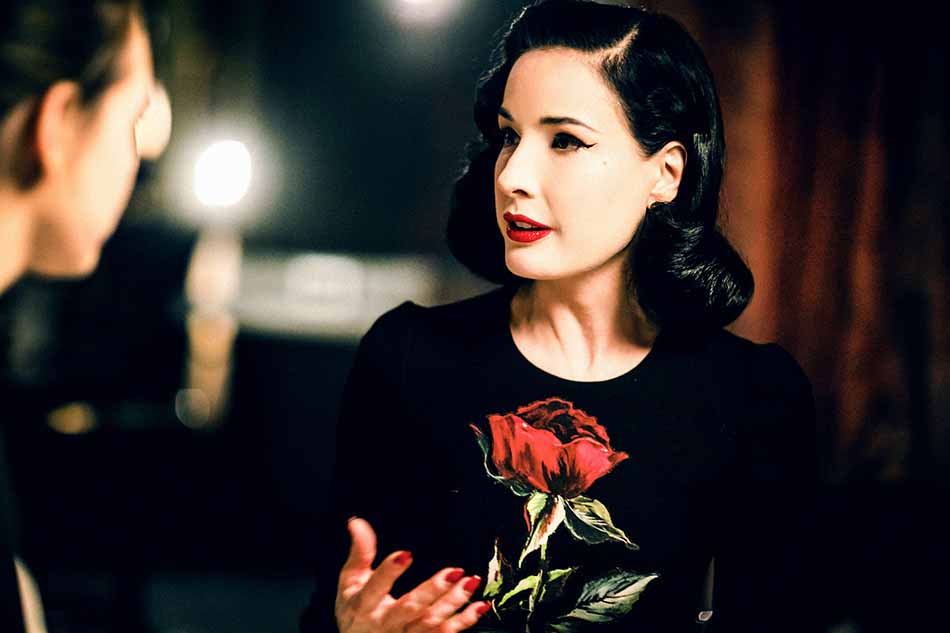 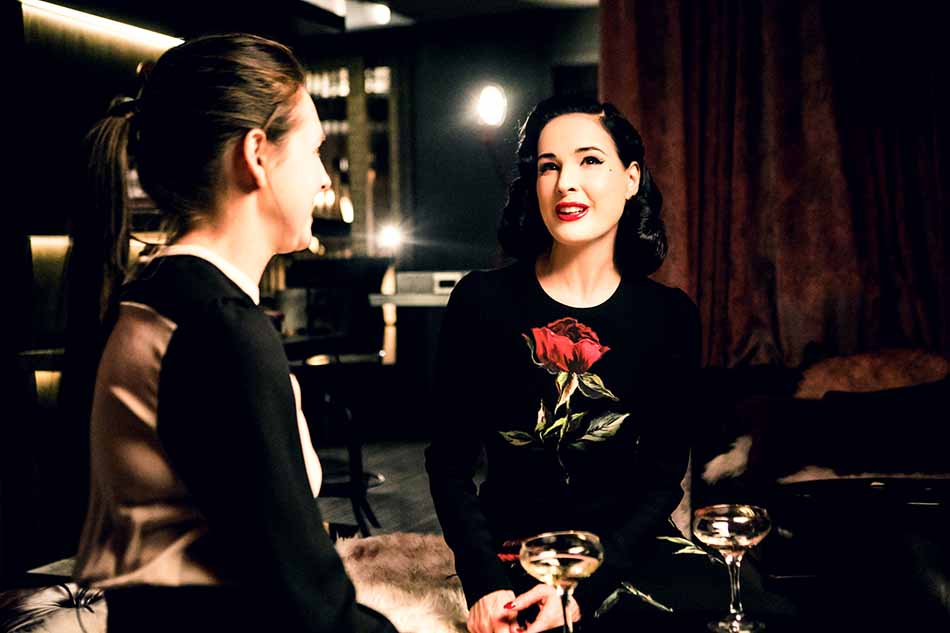 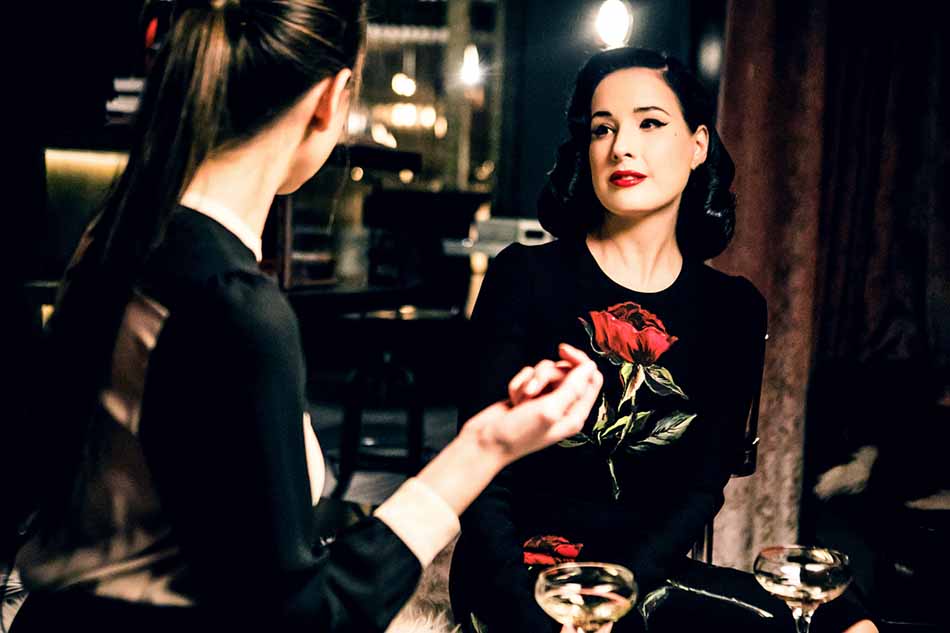 ADW: How many times have you been in love?
DVT: Well, it’s hard to say. I’ve definitely felt like I was in love but it was just infatuation. When you step out of it, actually, when I’m in it I can recognize the infatuation phase… which I love. It’s, again, that drug feeling. You’re not in love, you’re infatuated. I read this whole amazing story about birth control pills and how they affect our ability to choose the right mate and that’s why I thought, “No birth control ever again.” It was some “Time” article and I was stunned. It struck a chord with me because I thought, “This is why I keep going back and forth with this guy,” because I’d go on the pill and off the pill and I’d be into him and then not into him. It was really real. They did a big study about that and how it affects your ability to choose the right mate.

ADW: What are some of your biggest turnoffs?
DVT: Narcissism or trash talking, especially with girls. When I hear girls talk about how ugly some other girl is or just trash talking people… I love the refusal of engagement and watching people realize I won’t engage and then they feel stupid. I see that a lot with younger girls.  It doesn’t make you prettier or more interesting if you trash someone. Listen, I’ve got my enemies as much as anybody else, but I have a real purpose behind why I don’t like a person.

ADW: Would you say Valentine’s Day is a Hallmark holiday?
DVT: I don’t know. I think romance every day matters more. 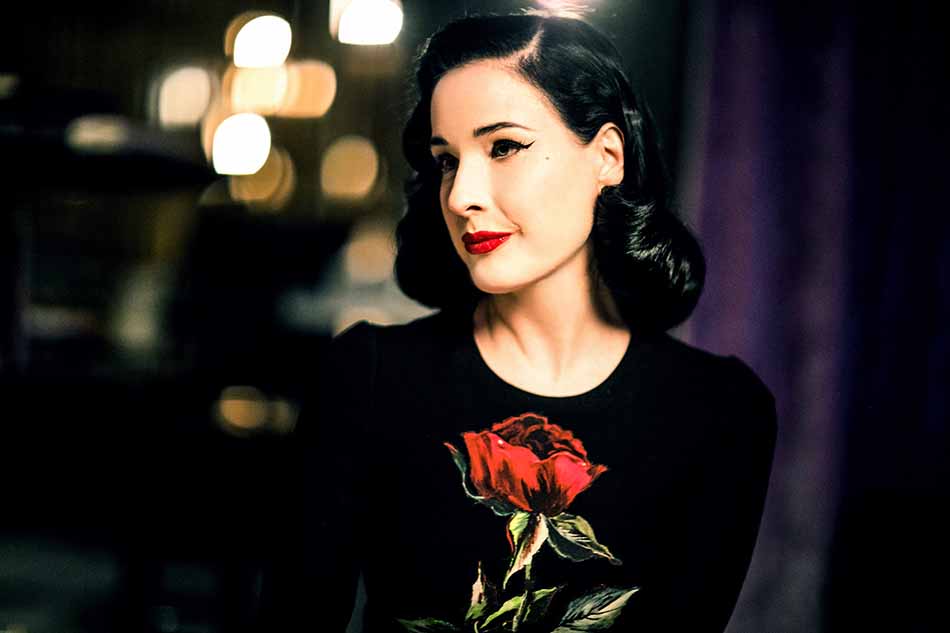 ADW: What was the most romantic moment in your life?
DVT: There are a whole bunch of them that I can think of. Different men in my life where I thought, “Wow, that was really romantic.” Songs written about me, that’s nice and romantic. I’ve had someone write my name in the snow, that’s romantic. The most romantic thing ever I can’t really say because I look at the relationship instead of those moments, you know? There are cute little things that men have done for me that I would never want to be with again, but it was a real romantic moment in the moment.

ADW: How was working with Richard Branson when you helped Virgin Atlantic celebrate 10 years of flying to Las Vegas?
DVT: He was so amazing, really, don’t you agree? I did two things with Virgin and then I had dinner with him one night in London. He was so great. The advice he gave me was, “Never meet your idols. You’ll be so disappointed!” I thought, “I’ve never been disappointed by meeting my idols.” Even when your idols are total assholes it’s kind of great because then you have a story. You want it to be a little bit difficult, otherwise what is the fun in it? I have a couple of friends who have stories about meeting their idols and how their idol like pushed them out of the way or whatever. You just have to have a sense of humor about it.

ADW: How was meeting your idol Madonna?
DVT: I met her three times and every time I was just terrified. The first time my ex-husband and I were invited to one of her parties. He didn’t want to go and said, “Go on your own.” I went on my own because I thought, “I’m not missing this.” Someone said, “Do you want to meet Madonna now?” I went over and she had a martini in her hand and those big eyes. You’re never ready for it. You’re not ready for the beauty of Madonna, first of all. So she had a martini and those huge Madonna eyes and she says to me, “Where’s Manson?” I said, “Oh, he didn’t feel like coming out tonight.” She goes, “Don’t you just hate boys sometimes?” Another time she kind of called me over and started talking to me about babies and she told me not to let motherhood pass me by. I thought that was interesting. Although, I kind of am letting it pass me by because I’m too scared in this day and age. She gave me baby advice and I thought that was kind of amazing. 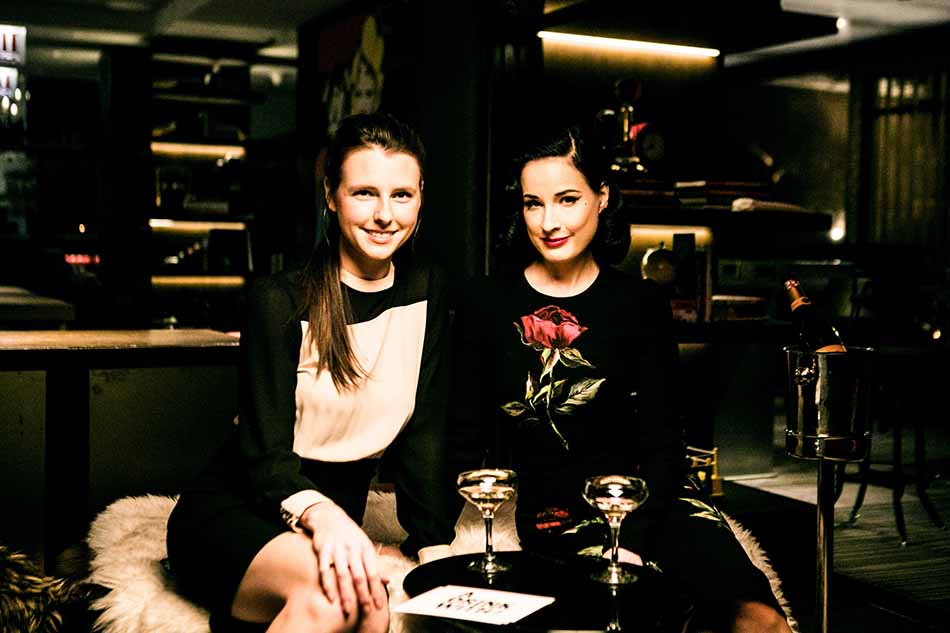 ADW: When we had a drink with Richard Branson he said life gets better with age. Do you feel the same?
DVT: I definitely agree with that. It’s something I’ve been thinking about a lot lately because I’m 44 and I’m starting to feel that ageist mentality, people kind of attacking me for my age. So it’s really interesting, I do think about that a lot. It’s just learning about what it means to be sexy. It’s really about cultivating more than your looks. We live in this wonderful world where being 20 doesn’t mean that you get to steal anybody’s man… you have to beware of the cougar! The cougar is a very dangerous animal because we have this knowledge and you can’t mess with that. I felt it recently, too. I had an altercation with a young 20-something girl. I was calm, smooth and moving in slow motion and she was like jittery, lower lip quivering and bumbling with her words, fumbling and freaking out. I wasn’t freaking out at all. I can have a calm, focused conversation. I couldn’t have done that when I was 20. It’s kind of empowering because when you’re really young you don’t really realize those things. You think you’re on top of the world, but you have so much more to learn about what it is to be a good performer or to be sexy. I almost retired myself because I thought, “Oh I should retire because what if I don’t look as good as I did when I was 30.” I just sort of went, “Wait, that’s not why people are coming to see me.” It’s not just what you look like. It’s really boring to watch someone who is just a pretty pin-up statue. You just gain so much experience and knowledge. It takes time to arrive at that. It’s pretty great, but it is hard as a woman because you’re constantly hit in the face with that. It’s like the ultimate insult.