He Got Where He Wanted To Be In Country Music.

It was 10 AM on a Saturday when Hunter Hayes sat down at The Commons Club to talk music over a glass of scotch. Hunter may be “Young Blood” in the country music game but his latest album shows his range from gospel to rock and back again. He chatted with A Drink With about his tour, Nashville and his friend Elton John, yes the Elton John.

ADW: How many people travel with you?
HH: We have two buses. Each bus carries about nine to 12 people. With us, it’s just me and the other three band guys, Nick and Brenton. It varies.

ADW: You have this life on the road, when is the last time you sat down and had a drink with someone one-on-one? Do you get alone time?
HH: I do, actually. Libby [my girlfriend] and I kind of designed this lifestyle where every time I am at home we promise each other the evening. We sit down and Netflix and chill like every night. That is our quality time. We catch up and let the world step away for a minute. That’s our retreat. That is our vacation. We make an effort to do that once a day. Which is a luxury, I get [that]. That’s about to disappear pretty quickly, but while we have the time and while I am in town, we make an effort to do that. 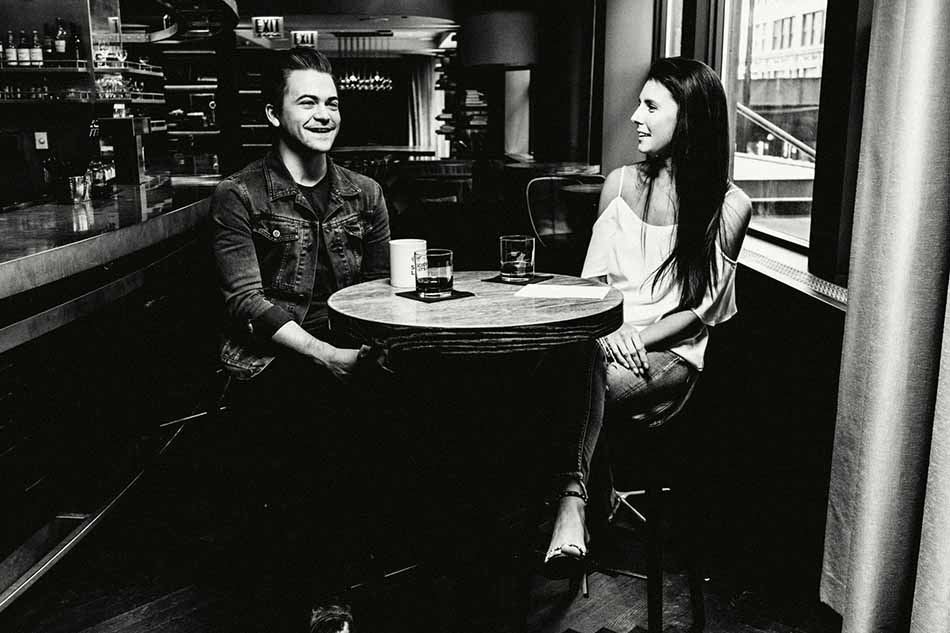 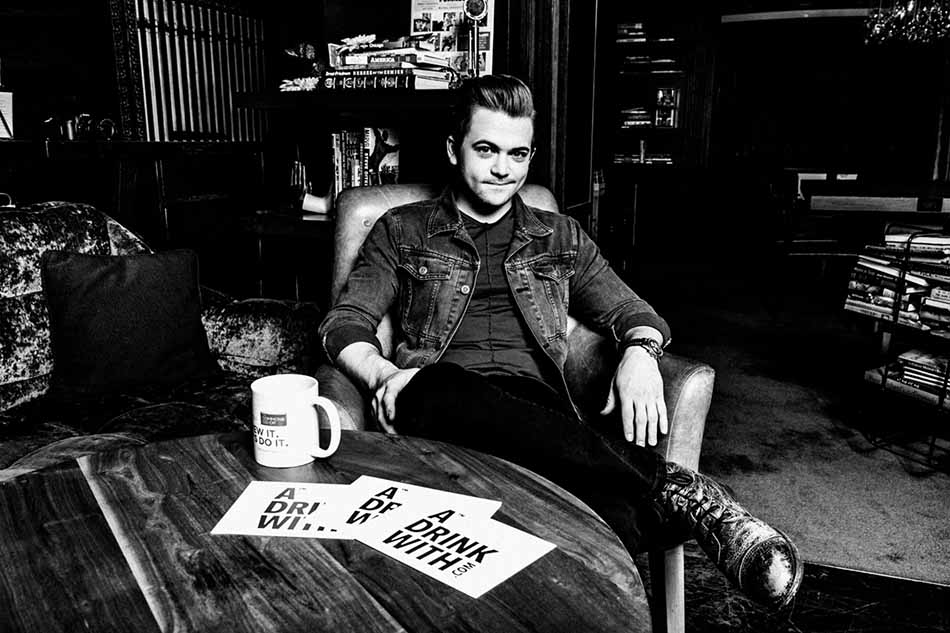 ADW: What is the key to making a long distance relationship work?
HH: I’ve been really good at it and I’ve been really terrible at it. When you love somebody, you figure it out and make it work one day at a time. There is no consistency in our world. There is no routine to be made in any way. It’s communication and honesty, too. There is no time to dance around something. If you feel something you talk about it, you bring it up quickly and you work through it.

ADW: I like that. Because if you just let it sit with you…
HH: It’s the worst! It’s toxic. We’ve gotten in a rhythm where we talk about things pretty quickly and efficiently. We get through it.

ADW: What is the best and worst part about being on the road?
HH: The best part is being on the road. I live to be on the road. When I was in high school I used to draw pictures of and design tour buses. [I’d measure] floor plans and design the side and [pick] the paint schemes. It’s such an image of being on the road. It’s a visual representation of everything I love about being an artist. It says, “I’m on the road.” It’s a tiny little 6 x 36-foot box that we all live in together but it’s a fun lifestyle. I love being in a new place every day. The hardest part is staying healthy. You really have to make the effort. When I was touring at 21, 22 years old it was super easy to stay fit and decently healthy and now it’s impossible. I’m not on the road nearly as much as we used to be — we will be soon — but for a while it was a two-hour cardio every night just sweating and working out the calories. Now it’s a lot of time at home and in the studio and then you’re back on the road for like three days. You get into kind of a [routine] and then it’s just gone. 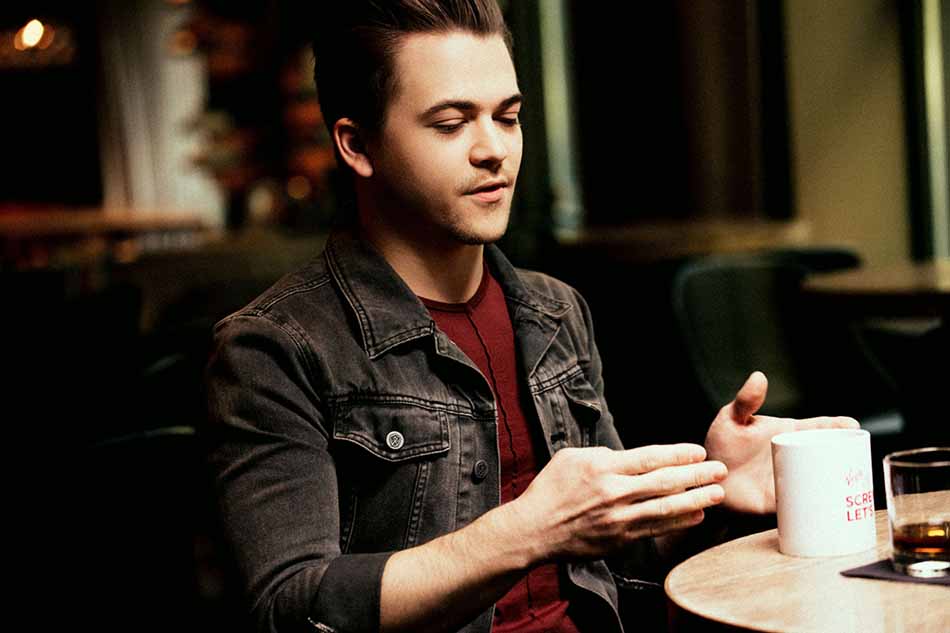 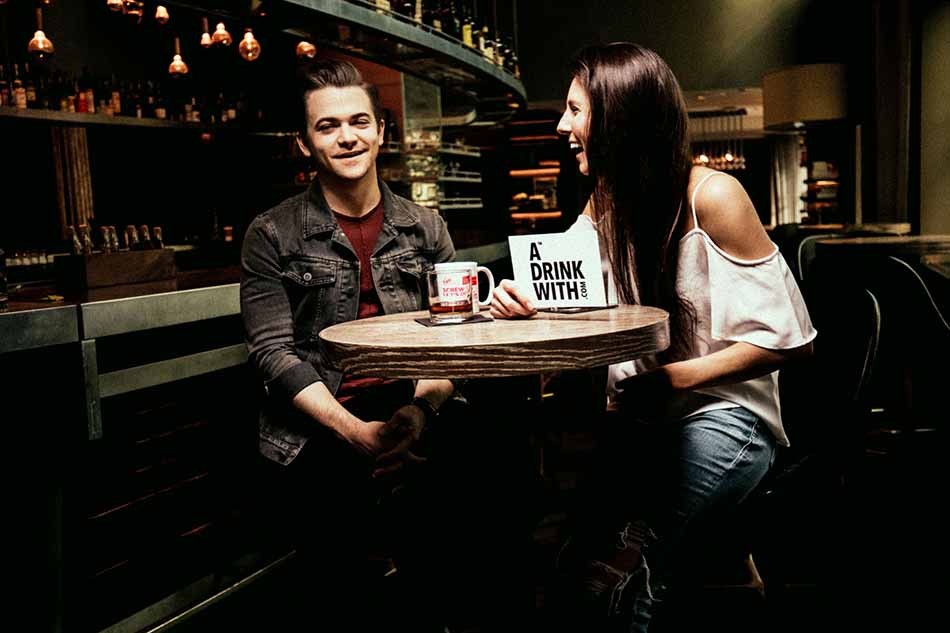 ADW: What is something you really wanted on your bus that is special?
HH: You should actually come check it out if you have a chance before we leave. I got to design this bus. It was kind of a crazy story. I don’t even want to get into it. It was a silver lining to a crazy chapter. It was empty when we started. When I heard that we were going to be able to design the bus, I downloaded an app on my iPad, designed the floor plan and started sketching up paints.

ADW: You reached success at such a young age. You were performing when you were two and “Wanted” made you the youngest male act to ever top the Billboard Hot Country Songs at 21 years old. What has it been like to grow up in front of the camera?
HH: I feel blessed because while you would expect something like that to be an issue — not [necessarily] an issue — but while you would expect that to be part of the story, it’s not as much a part of my story as a lot of people I know. I was really blessed. It’s not crazy. It’s not what you might expect. A lot of people respect the personal element. Being in Nashville… there are a lot of good people in the industry. 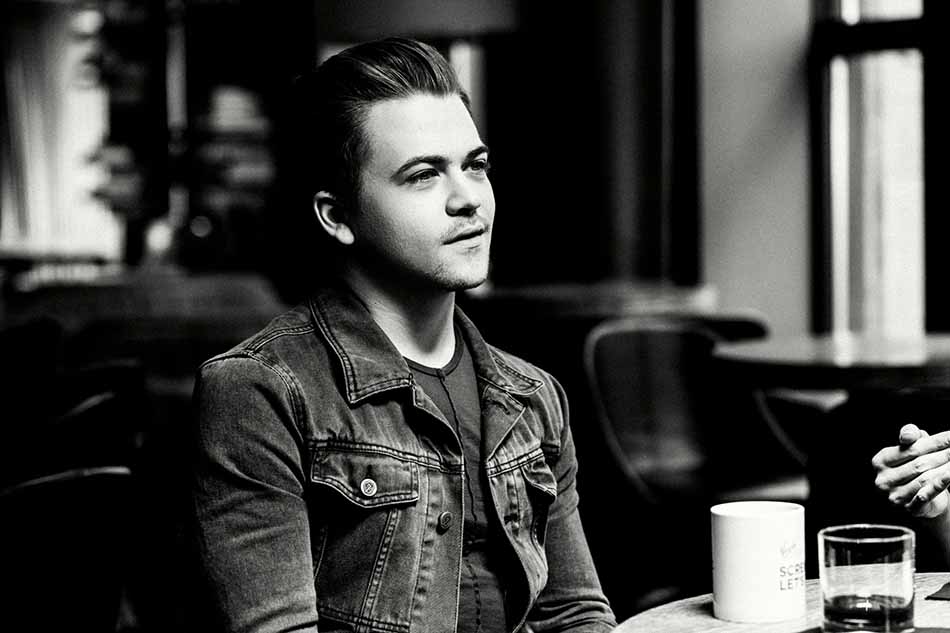 ADW: Who in the industry has given you advice for how to grow up in the public eye as you evolve in your career?
HH: There are a few people. Honestly, I can credit a billion people. My team, my band. People at my label have been actually pretty aware of the human element. They’ve been incredible people to me even through the struggle of working on this project. Artist wise… Elton John actually. I did a tribute album with Peter Asher on “Goodbye Yellow Brick Road.” Elton reached out, out of the blue, one morning. It was a Sunday morning. It was an unknown call. I answered it because I thought, “It’s probably Peter.” Well, it was a British voice but it was Elton. We talked for a minute. He gave me his contact information and he said, “Reach out when you’re in L.A.” or whatever. We were there for the Grammys and we had dinner together and became buds. I literally call him when I’m like, “I don’t know what to do!” He’s talked me through some scenarios. It’s always super quick. It’s always like 30 seconds of awesome life advice and then he’s like, “Okay, I gotta go!” It’s always super efficient and effective. He’s been huge. Keith Urban. I’ve reached out to him a few times. He’s been there for me in ways that I could never really truly speak to. He has been a profound influence but also just mentor to me in multiple ways. 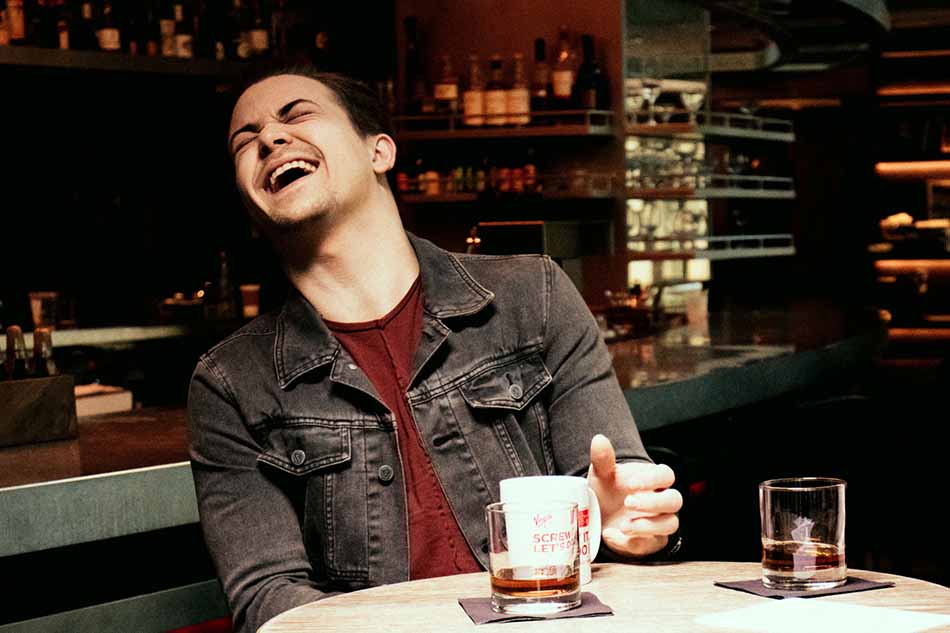 ADW: What is something you talked about with Elton that was a struggle? What have been some of the hurdles on this journey?
HH: Just the business side. I love the music side. The business side is something I’m not good at. I don’t anticipate being good at it and I don’t really want to be either. My brain doesn’t work well when it’s turned on. My brain works best when it’s turned off. Learning how to turn it off and learning when it’s okay to has been really challenging. Elton was really vocal in saying, “Forget about it. Don’t worry about that. Just do you.” There was one particularly hard decision and I don’t want to go into details, but he was like, “Just do it. Forget about it. Don’t think about it. Just do it and trust me you’ll never have to do it again.” It was really profound the way he said it… in the 15-second phone call.

ADW: Virgin Hotels is opening in Nashville in 2018. They want to create the perfect speakeasy for musicians. After a long day at the studio, what are you looking for in a place to hang out? What’s on the perfect playlist?
HH: Honestly, I think in Nashville the perfect playlist is just an 1/8-inch cable where you can plug in your phone and create your own playlist. One thing that we do on the bus… is just pass the cable around. Actually, it’s not passing the cable around because you pass the cable around to the first person and the first person hogs it for the rest of the night. They just play all of the random stuff on their playlist! I think that would be the perfect Nashville speakeasy where you can actually create your own playlist. At the end of the day at the studio you’re inspired by something so random. So random! The most unexpected thing. Last night we were getting back into the OneRepublic record. Ryan Tedder just put out this letter a couple of weeks ago talking about the “Oh My My” record, so I brought that back out and I’ve been jamming it pre-show every night. You should read his letter. It’s pretty profound. 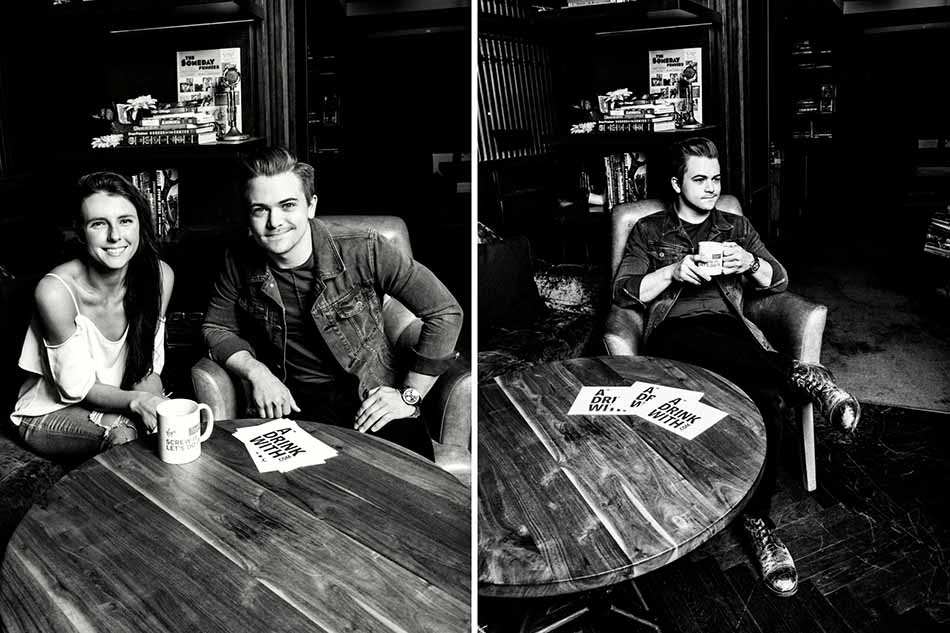 ADW: In terms of your creative process, is it true the best songs are the ones created in 20 minutes?
HH: I’m sure you’ve read the books. We all have. All of the “work efficiently” and “The Subtle Art of Not Giving a F*ck.” All of that stuff. I’ve definitely read that and it’s incredible, but I feel like the best songs happen when you’re not trying. Turn the brain off, let the heart speak thing. As cheesy as that sounds, that’s when true music is actually created. That is when real records are made. And all of my favorite songs, “I Want Crazy,” “Wanted” [were like that] … “Yesterday’s Song” we thought about a little bit. We definitely went there. It was a heavy song. Despite the sounds of it, it’s a pretty heavy subject for me. It’s not just about a breakup, it’s about a life change. The best songs absolutely happen when you’re not processing and you’re just emoting. 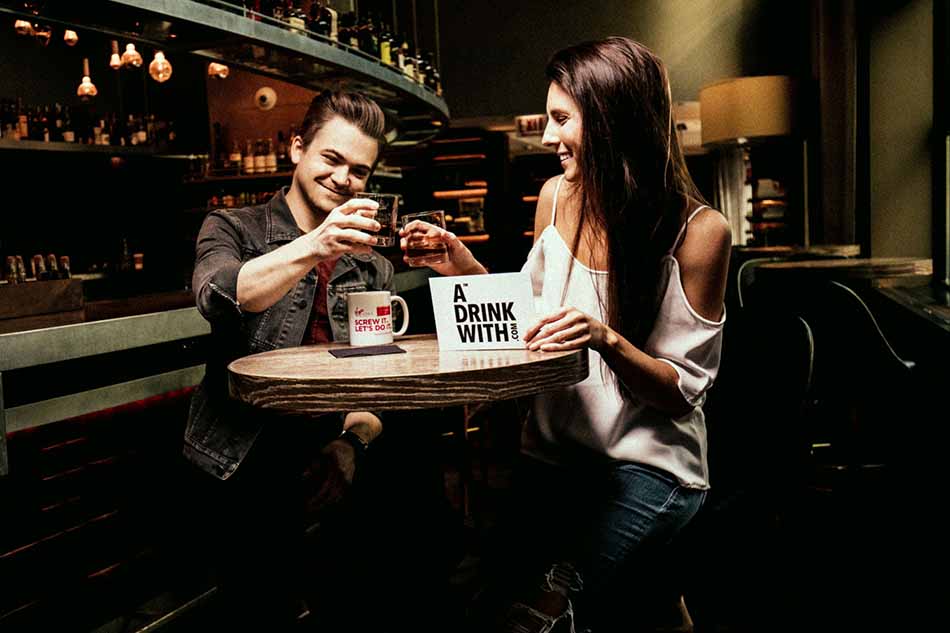 ADW: If you could have a drink with anyone, who would it be?
HH: I would love to have a drink with Garth [Brooks]. Garth shaped so much of my childhood… watching him on stage, all of the live concert specials. Everything about him was just so real. It was so present and just vulnerable, but at the same time he was this bigger than life figure to me. He still is. We talk a little bit. He’s been another mentor to me in a way, but I’d love to just sit down with him one night with no schedule, with nothing on the books and just pick his brain about his entire career. I feel like it’s going to happen this year!