Virgin Hotels San Francisco has officially opened its doors: so what do we need now? Drinks to toast with. The friend everyone needs to make? Lead Bartender, Tommy Quimby. Tommy is tasked with the (extremely) important role of designing and implementing an exciting and versatile beverage program to flow throughout the hotel’s dining and drinking outlets, Commons Club and Everdene Rooftop. So we sat down with him–and his favorite cocktail off the menu of course–to learn a little more about his journey through the cocktailing world.

Prior to taking up his post at Virgin Hotels San Francisco, Tommy grew up on the East Coast spending his formative years exploring museums, swimming, and running around outdoors. He eventually followed some friends out West where he discovered he could surf, ride his motorcycle year-round, and generally live the California lifestyle he found so alluring. Tommy, also drawn to the hospitality industry, soon found himself in the thriving cocktail scene at Michael Mina’s Clock Bar. From there, a position at Trick Dog, and most recently an alum of Rich Table – where he’s had the fortune of working and collaborating with some of the city’s most notable chefs and venue owners.

How long have you been behind the bar?

A well-balanced cocktail that a guest finishes and says, “I’ll have another.”

What inspired your love of creating cocktails?

Both art and the people I’ve met have inspired my love for crafting cocktails. I graduated with a Bachelor’s degree in Fine Arts and have always enjoyed creating; this is another outlet I never thought possible. In my previous career as an art teacher, I became accustomed to always being in front of people – and while bartending is a different type of stage, I still get to interact with a variety of people and cultures.

Are there any bartenders that inspire your style, or who you look up to in terms of skills/style?

There are three leaders I mainly look up to: Morgan Schick, the mind behind the cocktails for The Bon Vivants, Trick Dog, and Bon Voyage. I met Schick 10 years ago and have worked with him on a few projects since. He was the first to expose me to the relationship between the kitchen and the bar.

Next: Kevin Diedrich, who I’ve been friends with for a while and have always been a fan of his style and bar programs. He is currently running PCH (Pacific Cocktail Haven) which has a great, inspiring program.

Last, Marco Dionysis, who was at the forefront of the cocktail movement in San Francisco and remains a strong industry leader. I have been making his cocktails since I broke into the industry and when you speak with him his knowledge is almost unparalleled.

The one thing you wish more people understood about bartending:

That it’s a career. A lot of bartenders don’t admit that it’s their career choice, they say it’s something they’re doing in between other things or to get by–but it’s totally a profession. Not to mention, bartenders have played an important role in American history; they are a community hub, and a source of information.

Name five things that you love about San Francisco:

What are some of your hobbies and passions?

Surfing, art, classic cars, my motorcycle, and my 8-year-old Pit Bull, Tank, takes up a lot of my time… So I’d say he counts as a hobby.

If you could have a secret superpower…

I’d be indestructible. I could do all my risky activities like surfing and riding my motorcycle and never get hurt.

A delicious Rye Manhattan and a burger… and fries… and a pizza. Hey, this is my last meal I get whatever I want!

A dog… they’re smart, super loyal, and can be ferocious but also very loving as well. 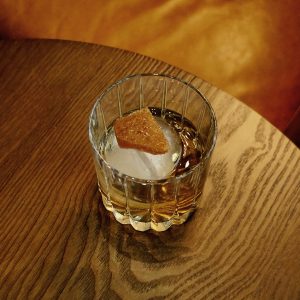 And with that, a sample of one of Tommy’s signature cocktails on the Commons Club menu: cheers!

Cheers to Tips and Recipes for Fall Entertaining

Fall is in the air and that means cozy sweaters, leaves changing colors and visits to pumpkin patches….

Behind The Bar With Patrick Smith

A Shot, a Beer and 10 Questions with Chef Adrian Garcia

As Virgin Hotels San Francisco opens its doors this fall, we’ll also get a taste of Commons Club…