To celebrate May and everything that comes with it: warmer weather, Cinco de Mayo, rooftop views and good vibes, we’re {crate} digging into the edgier and more eclectic corners of Latin, Caribbean and world music up top at Cerise Rooftop.

To kick-off our weekly rotation of Latin Music, we decided to sit down with Panama-born DJ and drummer Daniel Villarreal to discuss all things vinyl, his Latin influences and naturally, his fashion sense.

When did you start DJing and who/what were your early influences? Have they changed over the years?
DV: As a drummer and musician I think it’s only natural to want to keep growing your repertoire of musical outlets. I knew I wanted to start DJing more back in 2013. That’s when I got all the equipment I needed but I knew it would take a while to build my record collection. It took me 2 years, digging around record stores across the United States and through friends who trade and share in their passion for vinyl. 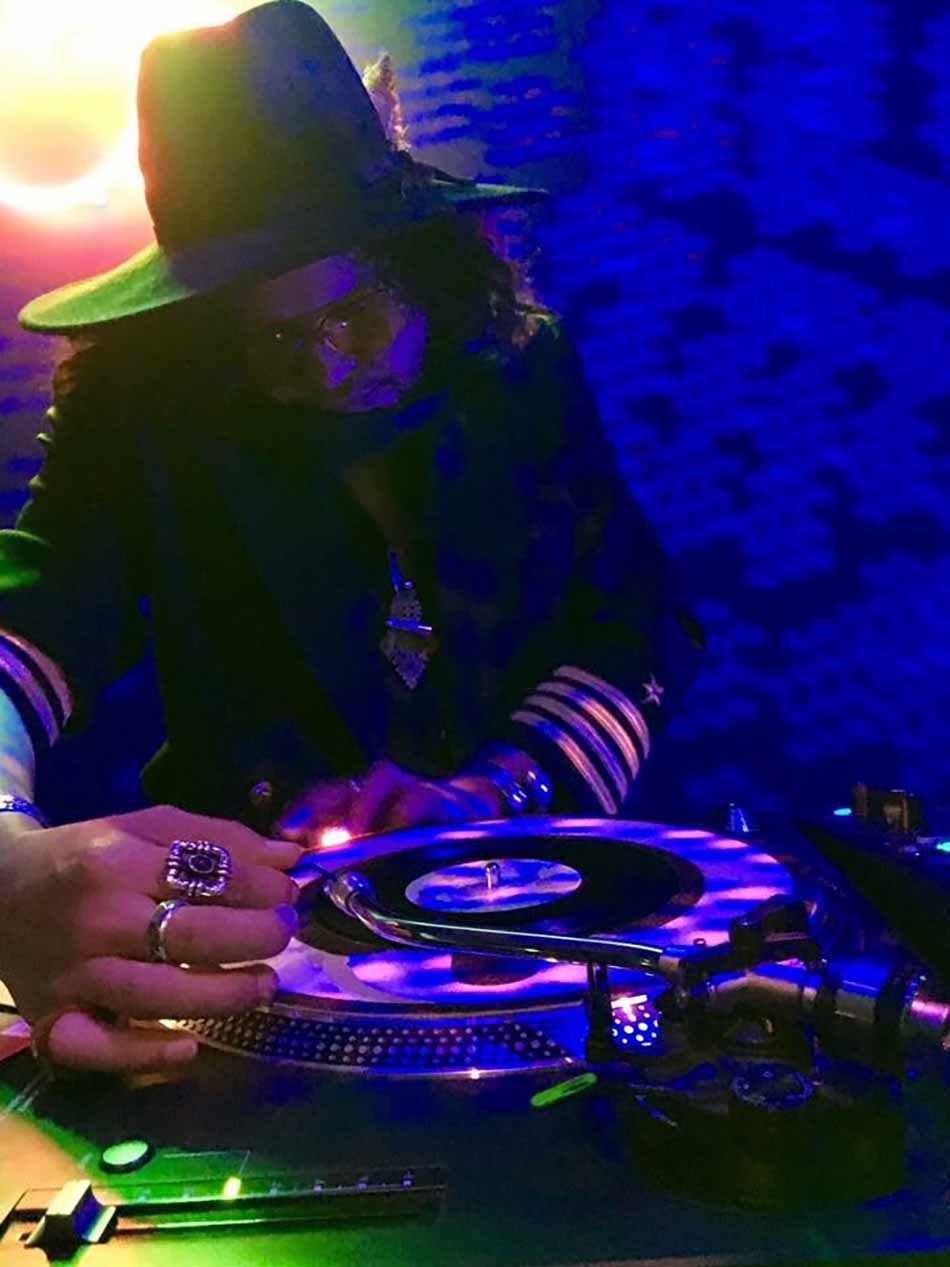 My first DJ set was in 2015. However my love for vinyl dates back to when I was a little kid. My father played the organ and I loved listening to music so much that every weekend my dad let me play a few records under his supervision. I had to sit patiently, listen, flip them over carefully and THEN put the needle in place to start the tracks without scratching the records. My early influences were all my dad’s records from early Latin soul, salsa, boogaloo, traditional music from Panama “Musica Tipica” and everything that people grew up listening to in the States. I also enjoyed classic rock and jazz.

Being a Panama native – do you have a lot of Latin influences?
DV: Yes, definitely a lot of Latin music and traditional music from all over the world. I grew up listening to Ruben Blades, Lucho Ascarraga, Avelino Munoz and Lord Cobra. Down in Panama, we listened and danced to other Latin music like salsa from New York and Puerto Rico and artists like The Fania All Stars, Hector Lavoe, Ismael Rivera, Ray Barreto, Willie Colon.

I love it all. From vintage Latin, salsa to funk, jazz, dub, reggae and soul music. However, you can’t beat afrobeat and Nigerian funk with some of my favorites, Fela Kuti and Tony Allen. 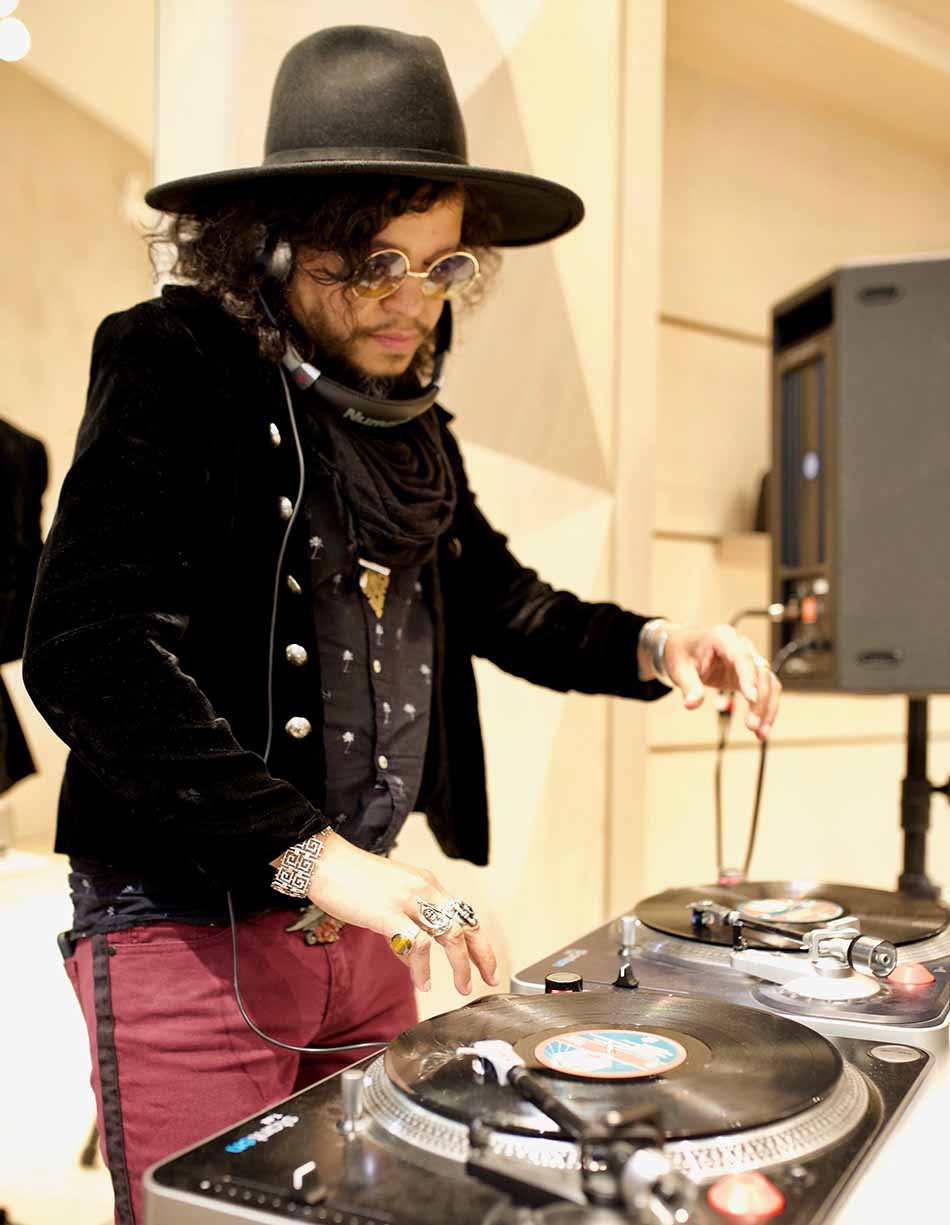 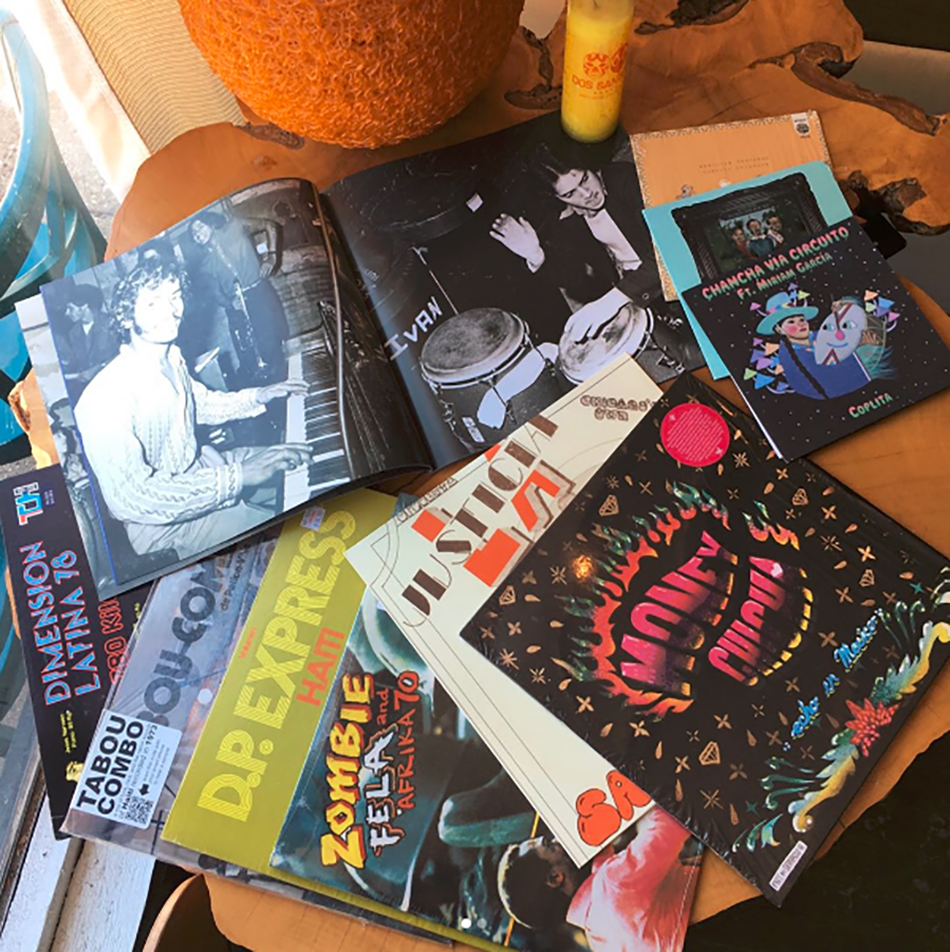 What’s your opinion on the importance of roots, traditions, and respecting originals and sources?
DV: It’s very important to learn where the music came from no matter what style of music you’re listening to. Every music has its roots, origin and history. Always keep in mind to be respectful of the tradition by listening carefully and studying what was done from the pioneers. That will make a huge difference in the way you listen and interpret music overall.

How do you typically prep for a set?
DV: I usually take a minimum of 80 to 100 records with me, combining full LP’s and 7” 45RPM, keeping in mind that everything has a good beat behind a song from slow, medium and fast tempo tunes. Sometimes depending on the venue, I’ll throw in some pop legends like Prince or Michael Jackson to classic rock like Hendrix to spice it up, but my taste is in world Latin flavor and funky tropicalia vibe. 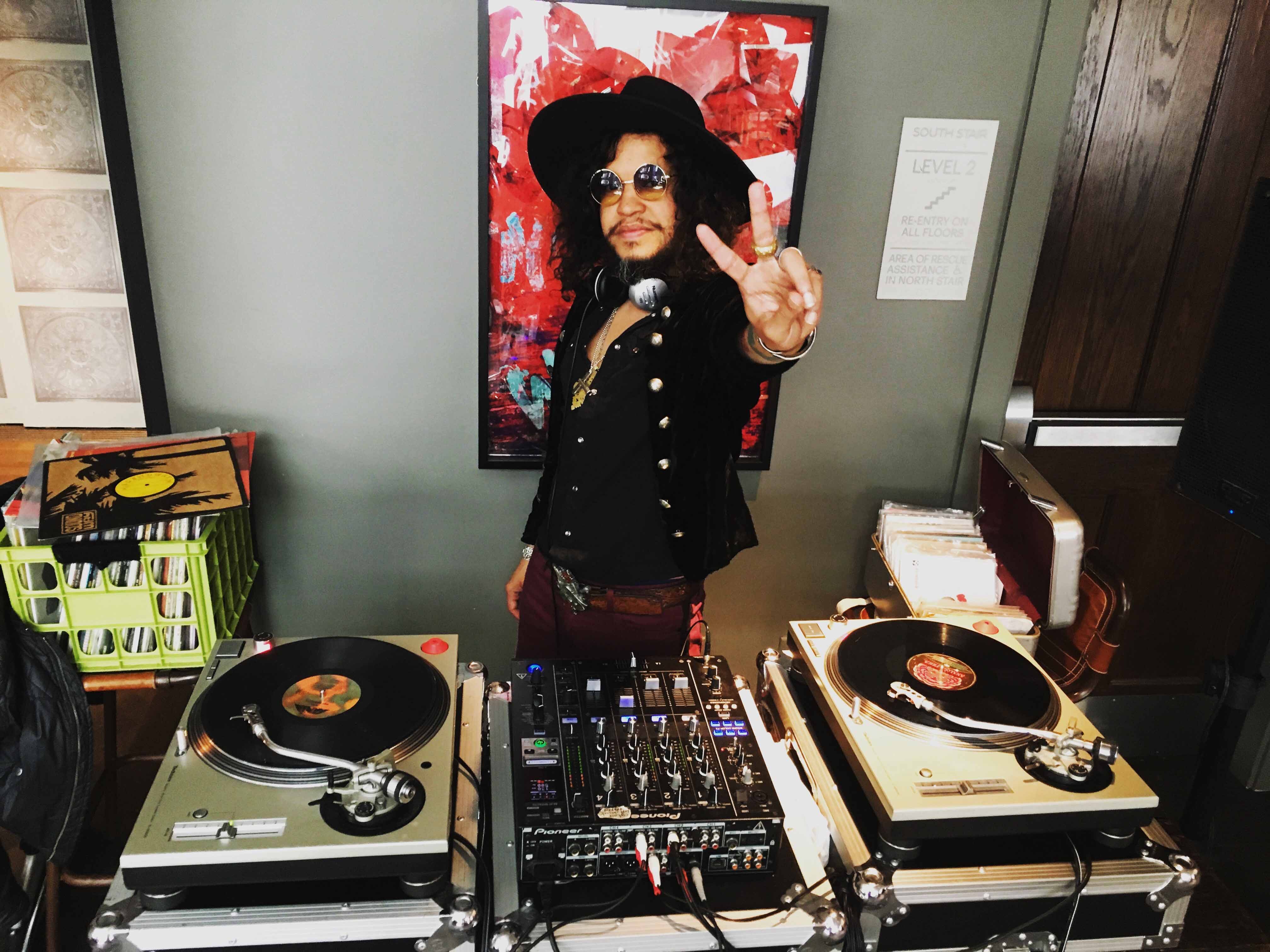 I play what I like and what is good in my mind. I’m just lucky people like what I play and what I like. My sets are rooted in good Latin music and then I take them off to a journey to Africa and back to the South America and can get a little psychedelic and electronic too.

Any insight about the underground Latin music scene in Chicago?
There is a lot of music happening in Chicago and the city does a good job bringing Latin/world music from outside of the U.S. to perform in big festivals and concerts in town. We have a big world music festival that lasts two weeks and takes place in different venues of all sizes around the city and we have places like Old Town School of Folk Music that brings this type of music to the people. We just have to keep our eyes and ears open to catch the good stuff. 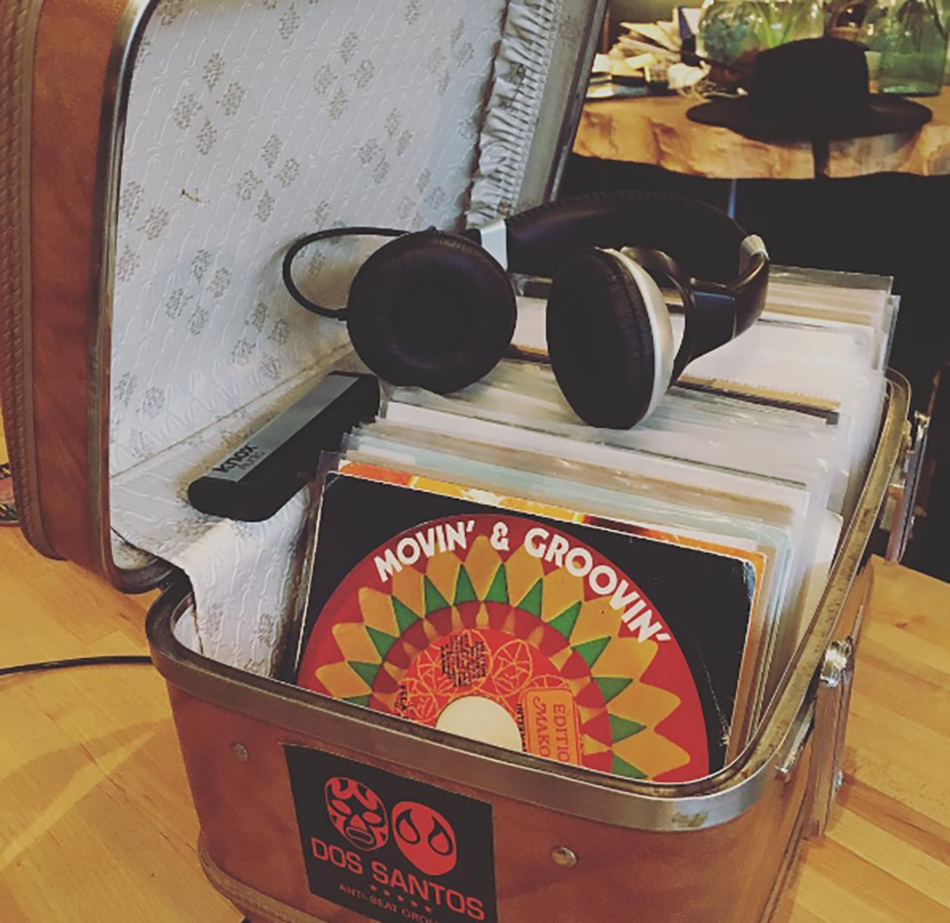 Latin music is often live, how does that passion translate into vinyl?
DV: Any music that is good live can translate the same to vinyl as long as it grooves and makes you move and dance. It doesn’t matter the format. But at the same time there is nothing like a live music show and watching a band do their thing.

How did your collaboration with twins, Jessica and Priscilla Anzaldua come about?
DV: I sometimes have more house or rock inspired DJs ask me to drum live to their sets. So on the flip side as a DJ with a more tropicalia vibe I thought why not bring live percussion instruments rooted to the style of music into play. I always have congas or bongos alongside me.

I’m a drummer for a Psychedelic Latin band here in Chicago called Dos Santos Anti-beat Orquesta, and that is how I originally met Jessica and Priscilla. Jessica plays congas and bongos for a band called Esso Afro-Jam and Priscilla plays in a Middle Eastern drum called the Doumbek. They are twins so they have a good chemistry together and are super in tune to each other’s musical direction. I’ve being trying to incorporate some extra sounds that give you the feeling you are watching a live band play. It’s a lot of fun and has room for improvisation and dancing. 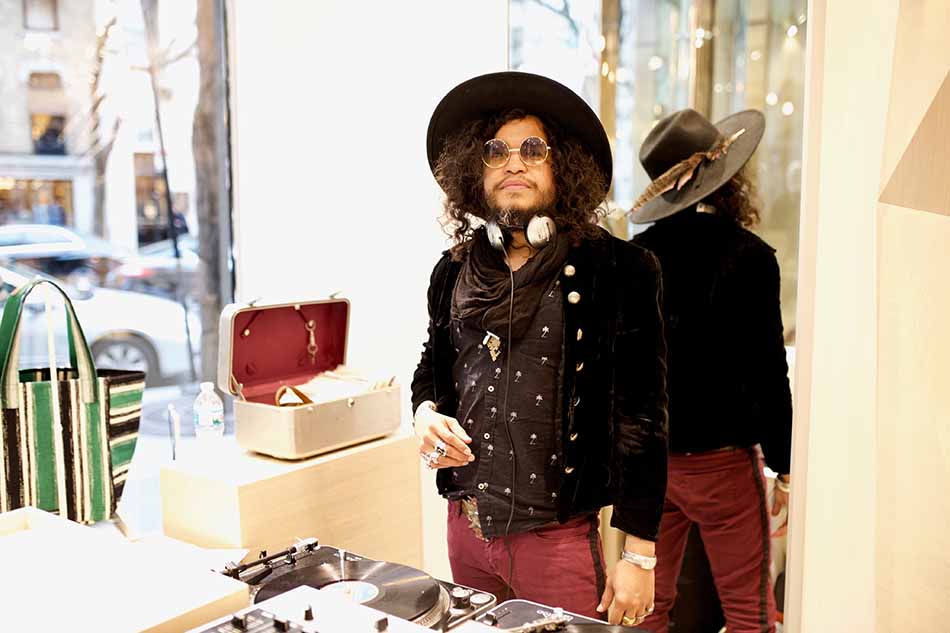 Ok, we totally dig your style. Can you describe your fashion and style inspiration?
DV: I wear things that you’ll of course see people wearing like hats, sunglasses, jewelry, scarfs, boots etc…BUT I like to pair them together very eclectically. I’m not really a believer in the less is more phrase. I love it all and sometimes all at once. I enjoy thrift shopping and vintage stores. My favorite colors are black and brown. 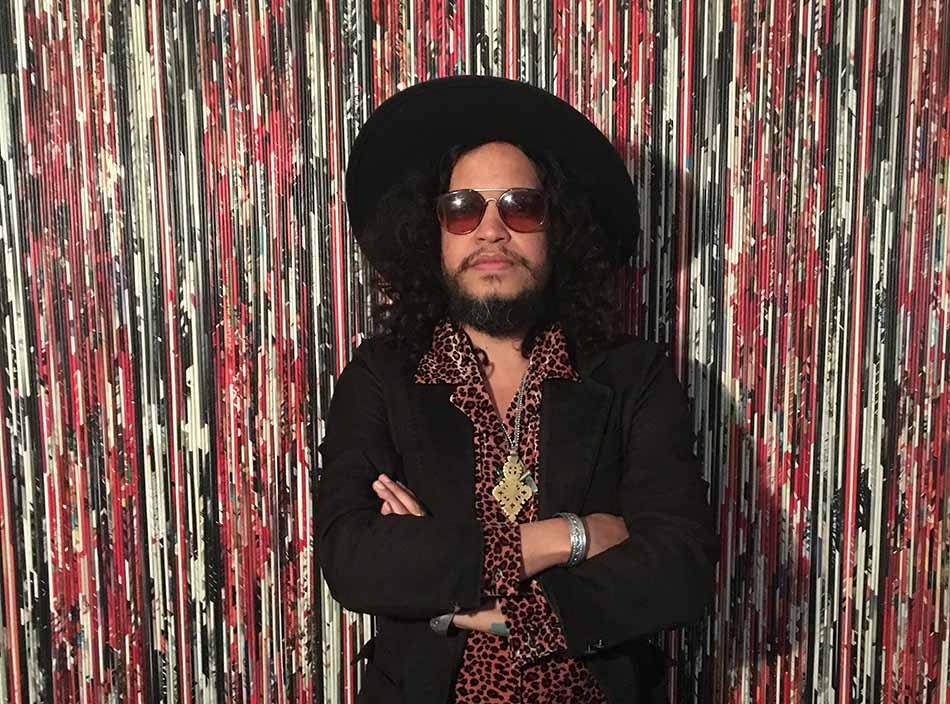 So, what’s next?
DV: I started working on tracking my solo album this year. I have tons of beats, songs and ideas that I want to keep experimenting, recording and producing with the goal of having some killer groovy tracks for all types of audiences. Ideally, I’m hoping someone is interested in releasing them on vinyl. In the meantime, I’m creating a band that can translate that sonically live. Then CELEBRATE! That’s what is next for me.

I’ll always keep supporting all the bands and the people that I play with and fellow musicians. It’s important to keep evolving my art and skills to whoever needs a drummer/DJ to collaborate with.